CAIN, Last 3 Digits and Styline team up for ‘Break Of Dawn’ on The Power House 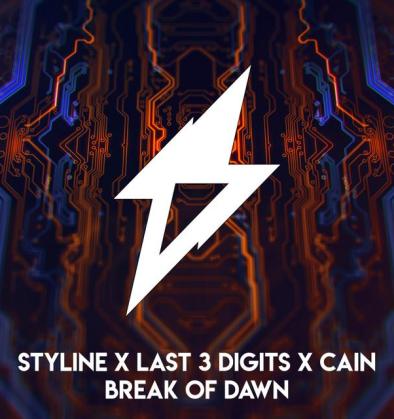 Styline is back on his own label teaming up with CAIN and Last 3 Digits for ‘Break Of Dawn’ which is currently out now on Styline’s imprint The Power House.

With a distinct, driving bassline and G-house spin ‘Break Of Dawn’ will have you on the dancefloor, getting freaky all night! This massive collaboration made them blend their skills and knowledge delivering a groove-bass infected record that has rapidly become a summer weapon.

CAIN, Last 3 Digits and Styline team up for ‘Break Of Dawn’ on The Power House

The record has a long story to tell. CAN and Last 3 Digits start working on it during last Amsterdam Dance Event; it receives a lot of tweaking and modifications during the following months and, after that, they sent it to Styline who describe the collaboration:

When I heard the first demo version I thought the vocal was killer, the theme was pretty dope, there were some cool stab sounds and the track had a good flow. I thought I could give the track a really fat bassline with a really fat kick that goes between Russian G-House sound and our driving Power House sound. It’s slapping like crazy now and the collab worked out great!


The vocal, which gives that surplus to the track in both late night and early morning situations, is a favorite element for all the three producers as Last 3 Digits describe:

The vocal is amazing but I really like the second drop, with the rave effect elements it’s a cool hidden gem you don’t expect.

CAIN has also been pleasantly surprised at how well the track has been received and it’s become a fixture in his sets; he’s also going to play at BPM Festival at the end of the summer and we’re sure that ‘Break Of Dawn’ will inflame the dancefloor making the crowd go crazy.