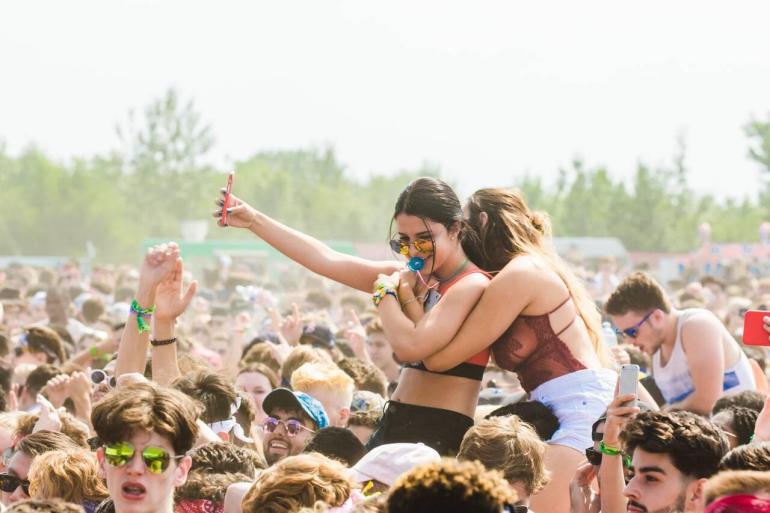 Girls at a music festival

Until fairly recently, not much research had been done into the consumption of tobacco and related products at EDM parties. However, a 2020 study posted by PubMed Central dove into this topic and found some troubling links. Specifically, the study concluded that among EDM party attendees, the prevalence estimates of “ever- and past-month use” of tobacco and nicotine products (like cigarettes and e-cigarettes, or vapes) were found to be more than double those in the general population. Just over 59% of EDM party attendees surveyed had used cigarettes before (36.2% in the past month as of that time), and 40.5% had used e-cigarettes (15.6% in the past month as of that time).

This research was done in part to “contribute information for designing preventive measures with EDM attendees.” And that of course raises the question of what the industry (including venues, party organizers, and even artists) might do to curb the use of unhealthy tobacco products.

Some of this will likely be taken care of by bans and restrictions beyond the scope of EDM. Just last year, Politico reported on an FDA ban of more than five million e-cigarette products. The same report noted that the FDA had delayed decisions on some of the biggest names in the industry (like Juul and NJOY). But the table has clearly been set for more expansive prohibition of vaping products –– which in time could make them illegal in some big venues and at some major events.

At the same time, however, there are also alternative products that –– if sold at EDM parties –– could help to curb the negative first- and second-hand health effects caused by cigarettes and vapes. Namely, we’d point to three products:

Nicotine Gum – Nicotine gum has long been an option meant to help people who wish to quit smoking. However, it can also satisfy nicotine cravings in the short term. Typically the product is chewed until the user tastes flavor, then lodged against the gums until the flavor fades, and so on. This provides nicotine and reduces the urge to smoke, and would enable EDM party attendees to enjoy shows without turning to cigarettes or vapes.

Nicotine Pouches – Nicotine pouches are newer to the U.S. market, but work much like gum –– without the chewing (and arguably with more interesting flavor ranges). Pouches are simply kept inside the upper lip and left alone to release nicotine in a controlled and gradual manner. These products also have the advantage of being somewhat “up-and-coming,” which may make them more appealing to EDM audiences than gum. According to a look at the nicotine pouch trend at Prilla, pouch sales had already topped $200 million by 2020, and some convenience stores had reported as much as 40% growth in the category over a year’s time. These numbers point to a product that’s already heading toward supplanting e-cigarettes for some users and could thus be an intriguing alternative at major music shows and parties.

Hemp Cigarettes – Smokable hemp has also become an intriguing option. Hemp cigarettes look and work like ordinary ones, but contain CBD rather than tobacco (or nicotine, or marijuana for that matter). They do not satisfy cravings the way nicotine gum or pouches do, but they can provide users with alternatives –– as well as solve the dilemma that some smokers simply want something to do at an event (meaning the physical act of smoking). Additionally, these are also “trendy” products that may appeal to audiences. While they’re not quite on pace with nicotine pouches, hemp cigarettes in the U.S. represented an $80 million market in 2020, with projections around $300 to $400 million by 2025.

The nature of EDM parties isn’t going to change. As is made clear in our own “Parties” section here at Groove Cartel, these events occur frequently and still attract the biggest names in the genre –– from David Guetta to Swedish House Mafia. They are big, festive raves at which people want to “let loose” and enjoy themselves without inhibitions.

This, within reason, should be encouraged. But given the clear link between these parties and cigarette and vape use, there is also something to be said for striving for a healthier environment. Alternatives like those suggested above could be offered at these parties without detracting from the atmosphere or enjoyment.