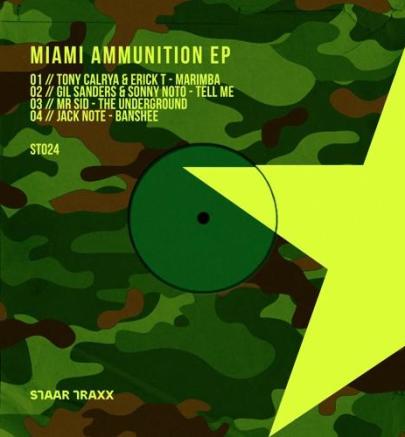 Mexican based DJ and producer Erick T & Swiss producer Tony Calrya are helping to keep the groove scene fresh and alive by dropping their track ‘Marimba‘ on Tom Staar’s imprint Staar Traxx. Records like this help you to forget the mainstream scene that’s happening and make you explore the other side of electronic dance music.

This track was released as part of the Miami Ammunition EP and it contained tracks by Mr. Sid, Jack Note, Gil Sanders & Sonny Noto. These guys have been creating exciting stuff over the years, and are successfully leaving their footprints behind. ‘Marimba’ is inspired by Latin sounds and it has their signature tribal vibes in it.

Erick T has already received support from Oliver Heldens, Kryder, Erick Morillo and many other big names in the music industry. He has signed releases with Juicy Music, UDTW, and he has many upcoming tracks that are signed on big labels as well.

Tony Calrya is an incredible artist when we talk about music production, he brings a different kind of energy and his tracks can totally refresh your mind with his innovating skills.

Talking about Staar Traxx, we totally salute their A&R team for finding new gems every time; they release around one track in a month but they make sure that the quality of the track is impeccable for the listeners. The songs that are released are supported by major artists and you can always find some of the tracks being played at big festivals like Tomorrowland & Ultra Music Festival. With some absolute bangers that have been released lately, we look forward to this label for some more.

If you would like to listen to this track, then you can hit the play button below!