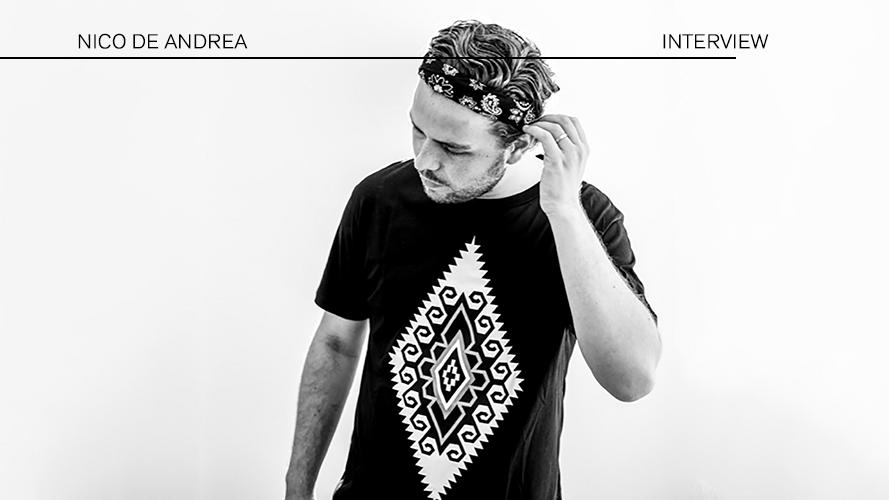 We are very proud to launch this new section of our blog. We will start to interview as many artists releated to the Groove Cartel.

As you probabily have understanded from the title, for the first article of this type, we have interview Nico De Andrea, a very talented artist from France.

At the end of the article there are some new and unreleased track from Nico!

Hi Nico, let’s talk about yourself. Why did you decide to produce music and how long you do it?
I’m resident DJ in clubs since 14 years and I’m going to turn 29 this year so I started music professionally pretty young. It was natural for me to start production to just make my Dj sets as unique as possible. I was more into Soulfull House, garage and techno at the beginning and you can still feel these roots in my tracks.

What is your track that makes you most proud?
My favorite track of mine is “La Marlonetta” to be released this summer. It fits really well with the music I want to play in my Dj sets. A mix between old & new school, underground elements but with a catchy latin hook that can be mainstream. We already have some supports from Axwell or Steve Angello but also from more underground names like Carl Cox or Erick Morillo. The target is really large and this is my main goal when I’m making music.

We have listened your last remix in collab with Tom Tyger, an amazing track! How did this collab come about?
Victor (Tom Tyger) is a friend of mine since a couple of years. We already did two collaborations that has never been released. I think that we have the tastes, the same passion for House Music and kind of similar profiles. We are from a new generation of french producer and we came to the conclusion that teamwork would be the only key to success. Victor is extremely talented and open minded. Definitely one to watch in the next years.


We have seen from your facebook page that you have posted the pic of the upcoming Spinnin’ sub label, Cartel. Should we expect new Nico de Andrea music on the that Label?
I am release close with Kryder. He is an example for me in the way he is taking care of his business. He always want to be creative, always want to show new talents, be pioneer in new musical movements, be edgy with his artworks and his art direction. I will be by his side on the new projects. I opened the first Cartel night in Miami and I will probably show some new music of mine on Cartel shortly 😉

What’s your plan for the future?
I have a remix for Bob Sinclar on Yellow Productions, a remix for HUGEL on Warner Music, a collaboration in the making with Gregori Klosman, and six new original tracks to be released shortly. I am already touring a lot because of my “DJ” profile so I have a lot of gigs this summer including France, Switzerland, Spain, Sweden, Dubaï, Turkey, UK, Israel and Morocco. I will just try to develop my name as a producer and not only as a “Dj”.

Would you give some advice to those who are now started in the world of music production?
The best advice I can give is to try to not copy anyone. Don’t follow any standards. Do not target any label or any Dj when you’re producing. Use some samples. Play with the BPM. Just enjoy what you’re doing, put some feelings in your music. If you love what you’re doing, people will feel that. Don’t try to be the next Axwell or Prydz, nobody can reach that level. Just try to be yourself, focus on your forces, try to bring something new and unique on the table. Back in the day, I produced EDM and nobody cares about my music (because I didn’t really enjoyed this style probably). As soon as I decided to make some more techy stuff, it felt more natural and honest and I received some supports and attention 😉


We want to thanks Nico from the bottom of our heart for taking his time to answer our questions.
Here it is all Nico’s social, so don’t forget to follow him everywhere!