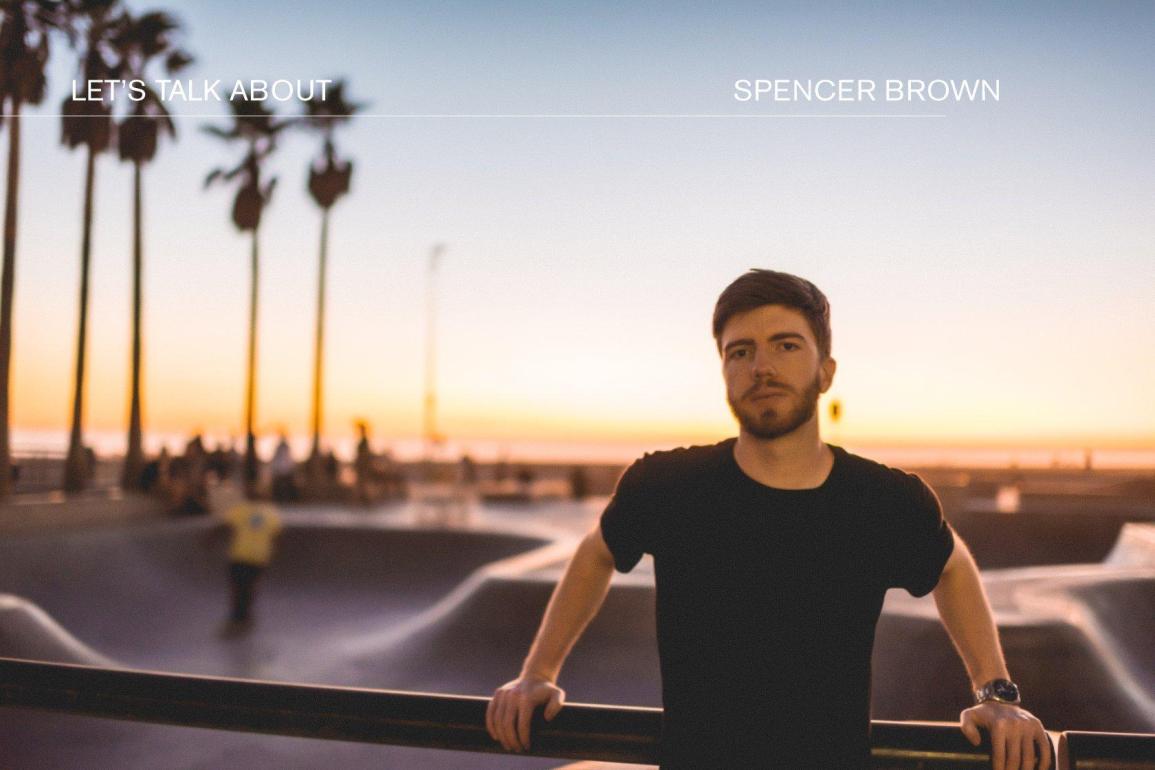 Spencer Brown is definitely one of the fastest rising producers in the scene: having caught Above & Beyond’s interest with his graceful debut release “Chalice EP” on Avicii’s LE7ELS, he’s now a permanent part of the Anjunabeats roster.

His Anjunabeats debut was the emotional “Vernal EP“, which immediately gained support from the Anjuna fans all over the world – and not only. This first EP set the ground for Spencer’s rise as one of the most interesting progressive house producers worldwide.


After two more EPs, an astonishing collaboration with Arty’s ALPHA9 and a bunch of remixes, the San Francisco-based producer has delivered his debut album, “Illusion Of Perfection“, on May 11th via Anjunabeats. We sat down with Spencer to discuss this and more, and that’s how he answered.

Spencer Brown interview; his ‘Illusion Of Perfection’ album on Anjunabeats and more.

Hello Spencer, thanks for sitting down with us. First up, can you please introduce yourself to those who may not know you?

Thank you all for this interview! I’m a 24-year-old musician who makes progressive music and travels around the world playing it. My sound ranges from house to techno, trance to deep house, but it all retains my own progressive flow. I just released my debut album, “Illusion of Perfection,” presented in a mixed form and it shot up to the #1 Dance album in a single day! I’m so grateful to be in this position. I’ve worked with Avicii and Above & Beyond, and I graduated from Duke University in Electrical & Computer Engineering in 2016.

When did you start producing music, and what inspired you to do that?

I’ve been a drummer all my life (started at age 2). I took up piano, bass, and guitar by around age 6. Around 9 or 10, I really wanted to record myself playing all of these instruments, so I bought a cheap all-in-one mixer. After discovering dance music around maybe age 12 or 13, I loved that you could do it all on your computer and went from there!

Which artists influenced you the most?

Many artists all over the map have influenced me over the years to take different steps in my career. Avicii was the first one to really get me into house (so I’m humbled to have worked with and toured with him). He was the first “big artist” to recognise my work. Through Avicii I found Eric Prydz, which opened the door to a bunch of techno and more underground stuff. I’d say my current biggest inspirations are Chris Liebing, Guy J, Ricardo Villalobos, and Tame Impala. Since about 2015 when I saw Liebing for the first time, I became a sucker for super heavy techno; on my weekends off, I tend to go to a bunch of SF techno parties.

Your debut album, “Illusion of Perfection”, is out now. Can you tell us something about its’ birth and development?

In college, I studied engineering, so I was basically in the library 24/7. Mixes always got me through those long nights and were my choice of music consumption because they would keep me in flow-state. Radio-edited tracks were my worst nightmare; I often found my concentration would break when a new record would come on.

After college, I was making music all day every day. I had such a sheer volume of music that an album felt natural at some point. We live in this generation where everyone is rapid-firing these radio-edited singles, and that is simply not what I personally like to do. Making radio edits feels like chopping off your newborn’s arms and legs to me. I love the appetizer, main course, and dessert… not just the main course.

Eventually, it hit me – I wanted to present my debut album as a mix album – something for people to enjoy and keep in flow-state while they work, travel, study, or whatever else. After road-testing a bunch of my new music, certain tracks stuck out and mixed well together, and ‘Illusion of Perfection’ just sort of fell into place. It felt totally natural.

To support your album, you are going to hit the road for a 4-months tour across the US. How are you feeling about that and how are you preparing for it?

I’m so grateful to be presented with this opportunity. DJ’ing has always been a passion of mine from middle school to high school to college and now as a full-time job. I have been DJ’ing for over 10 years and never pre-plan sets; I love reading the room with no plan in mind. Because I have such a wide variety of music to play, I favor longer sets. Usually, between 3 to 6 hours is good for me. With such long sets, I’m able to be more creative and try out my work-in-progress records that wouldn’t necessarily fit in a 1-hour set. You can trickle into different styles and sounds while still making complete sense.

I approached my team requesting to do a tour solely of extended and open-to-close sets, and they were very receptive. To prepare, I pack my crates with all of my released music, 50-100 of my unreleased tracks that no one has heard before, and probably 50-100 hidden gems from the past. I try to avoid playing anything that is “hot” at the moment or anything in the charts.


It’s a constant cycle of writing in the studio and trying out what I wrote that weekend. I’m thankful to have a VERY quick workflow; I can usually finish a record in a day or two. As a result, every show I play, there is always something fresh that no one has heard before. It’s quite low-stress, as my fans come to the shows expecting to hear a ton of Spencer Brown… and then I play a ton of Spencer Brown. So they leave happy, or at least I hope so.

Avicii, who recently passed away, was one of the first artists to support your music. You spent a lot of time with him while touring the US, how was that period for you?

Simply put, it was surreal. I was just an 18-year-old college kid who DJ’d frat parties, and I was slingshotted to playing in front of 30,000 people overnight. Avicii inspired me to make house in the first place, so it was the utmost honor to tour with him. I didn’t have much of a fanbase back then, but I think this period gave me the hope that I COULD eventually do music full-time, having worked with the King.

I was spending my weekdays cranking through engineering problem sets at Duke, then playing the Hollywood Bowl on the weekend. A literal “once-in-a-lifetime” experience.

Let’s talk about your relationship with Above & Beyond and Anjunabeats. When did you have the first contact with them, and how did you end up joining the label?

Above & Beyond started opening their sets in 2014 with the first record I ever put out called “Chalice,” released on LE7ELS, Avicii’s label. Eventually, our relationship grew through talking daily to my current manager, Neil Ribbens, who got my music in front of Above & Beyond. As Avicii moved more toward pop, I still loved house and techno, so the transition over to Anjunabeats felt very natural for me. The Anjuna fanbase is unlike any other, literally. It is full of the most positive, passionate dance music lovers I’ve ever seen. Being a positive, passionate dance music lover myself, it became my new home. I have nothing but love for the Anjunafamily.

A question from the Anjunafamily Facebook group: Are you creating music with Atmos and would you consider a set at Soundbar utilizing that technology so your fans can experience it?

It is definitely on my bucket list. I love the technology and have a great relationship with the folks over at Dolby SF. Unfortunately, this current tour is so busy for me that I simply don’t have time to mix my music in atmos this time around. I feel as if I tried to squeeze it in now, my attempt may seem half-assed, and I don’t do anything half-assed. I would much rather present the fans with a mind-blowing experience for which I can focus all my time and effort preparing.

If you could choose any artist for a collaboration, who would you pick?

Tough one! There are so many artists I would love to work with. I would probably say Eric Prydz or deadmau5, as they are the two progressive gods in my eyes. Although this is highly unlikely to happen, as they rarely collaborate, I would at least love to pick their brains at some point in my life.

We want to thank Spencer and the guys at Anjunabeats for making this interview possible.