It will boast state-of-the-art audio capabilities, as well as the largest LED screen on the planet — 160,000 square feet of display. 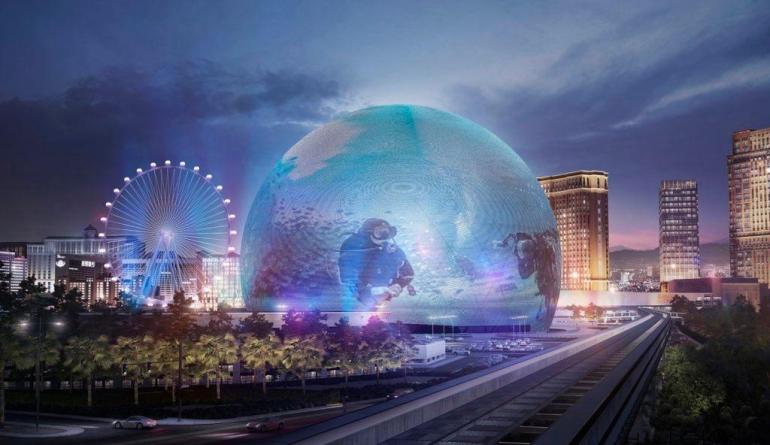 The Las Vegas concert venue tentatively known as the “Sphere” has been in the news for a few years now. Under the ownership of the Madison Square Garden Company, the venue is being constructed outside of The Venetian — near, but not on the famed Vegas Strip. And at long last, it’s beginning to take shape in all its multi-layered, spherical wonder.

The globe-like building (which will be connected to The Venetian via a pedestrian bridge) has been billed (constantly) as being all about the senses. It will boast state-of-the-art audio capabilities, as well as the largest LED screen on the planet — 160,000 square feet of display. At this point, it’s difficult to fully imagine the vision of the venue, and how exactly the massive, curved display will pair with audio. What does seem clear though is that while the MSG Sphere will supposedly host events ranging from corporate get-togethers to boxing matches, it may be particularly ideal for electronic concerts.

This is first and foremost because the venue should get off-the-charts publicity as a feature of “new” Vegas entertainment. Over the last decade or two, the traditional entertainment scene in Vegas — namely, the gaming scene — has become somewhat stale among younger tourists. Slot machines (the bread and butter of Vegas) are dull to millennials and members of Gen Z, and the convenience and variety of the online poker scene divert more interest than they get credit for. While it’s true that some Americans might visit Vegas to play cards because they might not be able to play for money in their own states, partypoker outlines that free games are accessible at high-end sites online. Generations already used to mobile and computer gaming would rather play poker online than in a crowded (sometimes intimidating) casino.

How the MSG Sphere could help the dance music scene

What this means for the MSG Sphere is that it fits as a new attraction in a city that needs them. Vegas is always looking for ways to attract younger generations, and a brand new, one-of-a-kind performance venue will be a valuable asset in that effort. As for why this matters for electronic music specifically, let’s just say the Sphere will attract more millennials and Gen Zers if it’s hosting EDM shows and pop stars than classic rock groups (though it will surely do both).


Another reason that the MSG Sphere seems ideally suited to electronic music is that it is designed to provide a total sensory experience most akin to what one usually gets at an EDM show. While we noted above that it’s difficult to tell exactly how the display and audio capabilities will work together, we do know some specifics. For example, it has been reported that the lowest bass response will actually be transmitted through the floor rather than the air; people in the Sphere will quite literally feel bass rather than necessarily hearing it in the traditional sense.

7 Main Rules of Songwriting to Create a Masterpiece

That sort of sensation, coupled with a planetarium-like display of — we imagine — lights and visuals pulsing in rhythm with the music, sounds like the best possible version of an EDM show. While plenty of musical genres and performers can and will make excellent use of this kind of show, it really feels as if EDM has been striving all the while to put on a performance the likes of which this venue will enable.

Finally, we’d also note that electronic performers have actually been experimenting with spherical visuals for a while now already. For istance, Bassnectar has experimented with 360-degree performances (not explicitly spherical, but similar in nature). And Eric Prydz has performed within a “holosphere” on multiple occasions now. This is not to say electronic artists and DJs have necessarily been working their way up to the MSG Sphere — but it’s clear that some of the genre’s biggest names have been intrigued already by bringing 360-degree visuals into their acts.

Altogether, these factors make the MSG Sphere seem like a potential breakthrough in electronic music performance. Given the “new” Vegas publicity it will generate, the performance capabilities it will provide, and its natural fit with the genre, it might just be the next big thing.