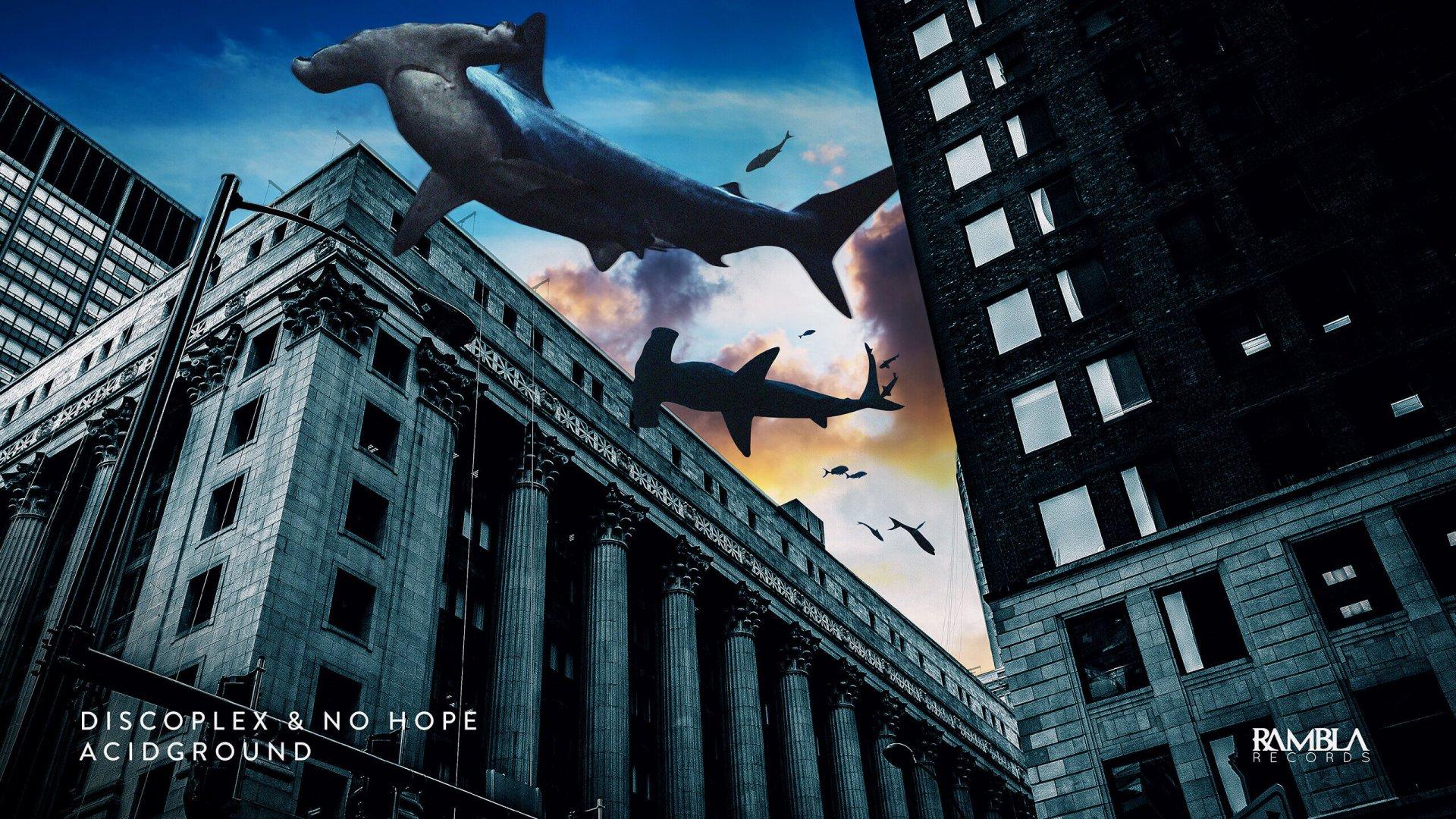 No Hope & Discoplex talk about “Acidground”, upcoming on Rambla Records

[vc_row][vc_column][vc_column_text]Upcoming and growing, three different persons with different visions, different artistic visions, different sounds, all of them, coming together and realizing, they could create something unique. This is what this collaboration is about, the Spanish duo No Hope and Italian producer Discoplex found each other through the path and decided to join their artistic ideas into this well-crafted techno track, which is being released on Italian producer duo Anderblast’s imprint, Rambla Records.

The song relies on percussive elements creating the perfect atmosphere for a dark feeling, joining in with vocal cuts which immerse the space of the track into the perfect sound for an underground feeling, then all progressing into the addition of an arpeggiator which leads to an astonishing sensation of dancing into the movement of the element itself, almost bringing memories of the rhythmic patterns of old-school disco basslines, but treated to be a revolutionary sound into the track.

We had the need to talk with the minds behind this project, and we didn’t miss the opportunity to do so.[/vc_column_text][/vc_column][/vc_row][vc_row][vc_column][TS_VCSC_Soundcloud url=”https://soundcloud.com/ramblarecords/discoplex-no-hope-acidground-preview”][/vc_column][/vc_row][vc_row bg_type=”bg_color” bg_color_value=”#ededed”][vc_column][vc_toggle title=”Hello guys, it’s our pleasure to have you on our page! Can you give us an introduction of who you are?” style=”square” color=”black” open=”true” css=”.vc_custom_1515413048552{background-color: #ededed !important;background-position: center !important;background-repeat: no-repeat !important;background-size: cover !important;}”]No Hope: We are a duo from Barcelona. Since 2012 we are working in the electronic scene trying to show our music, which is not based on a fixed style, but just on emotions and good vibes, that’s our philosophy.

Discoplex: I’m Gabriele, dj/producer from Italy, aka Discoplex. Just a few months ago Discoplex was a duo but we decided to separate our musical paths by pursuing different goals for our future careers. Right now, Discoplex proposes a mix of sounds and sensations to bring his current audience into the club music scene[/vc_toggle][vc_toggle title=”How did No Hope and Discoplex got to meet each other?” open=”true”]No Hope: We remember that we were really interested in releasing in HoTL and, in that moment, Discoplex released there the track “Agoaie”, played by Kryder in Kryteria 53. We fell in love with this one and so we decided to contact them to work together on some sexy house vibes.[/vc_toggle][TS_VCSC_Soundcloud url=”https://soundcloud.com/hotlrecords/discoplex-agoaie-teaser”][vc_column_text]Discoplex: In that period, the support of Agoaie from Kryder allowed us to introduce ourselves to
the followers of the groove cartel music; No Hope contacted us for a collaboration and that was
how our friendship began.[/vc_column_text][vc_toggle title=”How do you feel about releasing on such a promising label such as Rambla Records is?” open=”true”]No Hope: For us is amazing to start the year with Rambla Records and Anderblast, we love the
concept that Anderblast are bringing with this and what they want to make in the scene, it’s so
cool!

Discoplex: I follow Anderblast since their first release. They were one of my sources of
inspiration for my songs. When the boys told me that our track had conquered Anderblast I
didn’t want to believe it. I’m more than honored to release my music under their label.[/vc_toggle][vc_toggle title=” What is your actual vision of the music movement right now? What do you guys expect to achieve on today’s scene?” open=”true”]No Hope: We think that our opportunity is now because the big labels such as Size,
Bibliotheque or HoTL are open to new artists, no matter if they have big names or not, they are
just focused on the music they make. We really think that all labels have to follow that example
because, for the new talents who are independent, is hard to be in the big labels although they
make good music.

Discoplex: A generational change is under its way. Labels are always looking for more fresh
material and new artists to launch. We have the opportunity to do great things and be listened
by big names… That’s the goal that I have been trying to achieve for a long time. The
collaboration with No Hope was based precisely on this vision.[/vc_toggle][vc_single_image image=”6244″ img_size=”large” add_caption=”yes” alignment=”center”][vc_toggle title=”How much did it took to complete this project of yours? Were you guys stuck at any point?” open=”true”]No Hope: In this occasion, we took a long time, almost four months. At the beginning, we were a
little stuck because it was hard to make something groovy and underground at the same time,
but with the magic touch Discoplex at the end of this process we got what we wanted.

Discoplex: It was really difficult to find something innovative, but after several comparisons and
attempts we scored the desired result.[/vc_toggle][vc_toggle title=”What is the main aim of this new collaboration between you guys? What feeling did you wanted to create with this track?” open=”true”]No Hope: We were focused on the underground vibe, we wanted to make an underground track
with club vibes, something with groove but dark at the same time… And we think we have
achieved it.


Discoplex: The main purpose of this collaboration was to find hidden and innovative sounds and
combine them with the common passion we have for the groove music. The result led to a new
underground concept that we fell in love with.[/vc_toggle][vc_toggle title=”When selecting sounds for this track, what philosophy did you applied? Did you recorded sounds, used samples and processed them, used virtual instruments, or any other method?” open=”true”]No Hope: We worked a lot with different kind of samples and we processed each one of them in
a different way. Something we really like about Ableton Live is that it is very easy to manipulate
samples and work with them.

Discoplex: I was influenced by David Tort’s acid bass; his acid style is really cool. But I wanted
something more, something that was not a simple copy paste. I spent hours and hours leafing
through the sound libraries and finally found the acid sound that struck me and that I wanted it.[/vc_toggle][vc_single_image image=”6248″ img_size=”large” add_caption=”yes”][vc_toggle title=”Who are your favorite producers of the moment? Who would you like to collaborate with, and why would you like it to happen?” open=”true”]No Hope: In this moment, for us, Sebjak & Simon Kidzoo because the things they’re making are
so good for the scene… Sebjak with Bibliotheque, with that unique sound, and Kidzoo that now
is bringing back the old school sound with tracks like “Close to you” or “Mikumi”.

Discoplex: Kryder and Mark Knight are my favorites. I think their music fully suggests what club
music wants. Right now I’m collaborating with different producers but surely I hope with big
names in the future.[/vc_toggle][vc_toggle title=”We have seen than you guys have released on labels such as Juicy Music and HoTL Records, two labels with a big influence in the scene at the moment, how do you feel about that?” open=”true”]No Hope: We are very proud or ourselves, HoTL is a good label, very selective with the music.
They are bringing really good house music to our generation, a unique style which mixes
techno, house and groovy sounds. To be here, in that point, is such a big thing for us… And we
hope we can release more tracks with them because we really love the “HoTL House”.

Discoplex: I am very proud to be part of these families. I am very happy that Juicy Music has
released my tracks. There is an excellent relationship with Robbie Rivera. I also thank David
Tort and Markem for launching me on the scene. I hope I can release fresh music again under
their HoTL records.[/vc_toggle][vc_toggle title=”What are your plans for this starting year? What we can we expect from No Hope and Discoplex?” open=”true”]No Hope: We have a lot of music to be finished with big names, each one different from the
other, so many diferent styles and different collaborations with “big ones”. Among these
collaboration, we are working on another track with Discoplex!

Discoplex: Something big will come in the early months of this 2018. For now I can not reveal
anything but the wait will be worth it. In addition, a new track with No Hope is under
construction.[/vc_toggle][vc_toggle title=”What can you say to people who are expecting more of your music?” open=”true”]No Hope: That they will have to be a little patient because we have really cool stuff to show
them this year. I think people don’t expect what we are going to bring them this year.

Discoplex: Do not stop following us, you will see beautiful ones! New year, new music![/vc_toggle][/vc_column][/vc_row]