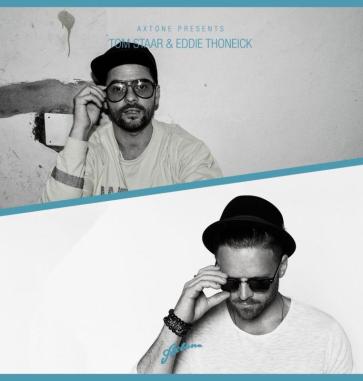 Not only massive releases and crazy parties, Axtone delivers also one of the greatest radio-podcast out there. This month Axtone presents has been taken over by two of the greatest members of the Axtone family: Tom Staar and Eddie Thoneick.

The famous electronic music label, founded by Axwell founded in 2005 has now become a lighthouse for the industry. In the last few years, Axtone has delivered, besides the usual label releases, a series of parties around the world in the best clubs and festivals as well as not one, but two, exclusive radio show. Axtone Presents and Axtone Smörgåsbord rapidly become very popular thanks to the super high quality delivered and the continues new music played.

The latest Axtone Presents episode is the number 048 and it sees Tom Staar and Eddie Thoneick behind the decks. Both artists have dropped some new exclusive music and already announced upcoming releases. One of that is the next Axtone release; it’s called ‘OtherSide’ and it has been played massively in the latest months. An interesting note about the record is that it was played for the first time by Tom himself in summer 2016 for reappearing 2 years later during his performance on the Axtone stage at Tomorrowland.[/vc_column_text][TS_VCSC_Soundcloud url=”https://soundcloud.com/hypebeastsounds/otherside” color=”#1e73be”][TS_VCSC_Soundcloud url=”https://soundcloud.com/axtonemusic/axtone-presents-tom-staar-eddie-thoneick” color=”#1e73be”][/vc_column][/vc_row]