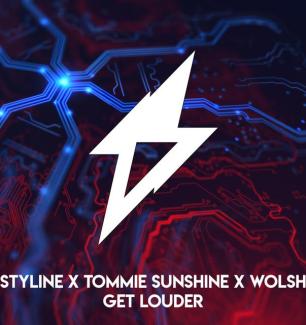 If you thought that Power House would take a few weeks of summer break, well you were wrong; Styline is back on his own imprint delivering another massive production with the help of Tommie Sunshine and Wolsh.

‘Get Louder’ is the name of this brand new track and, without hesitating, we can say that it’s our favorite record of the label until now. Because a track made by six hands, you can clearly hear influences by all the producers behind that, making ‘Get Louder’ a unique tune of its genre; it breaks the mold of your typical club weapon as Tommie Sunshine describes, “It’s the best piece of music protest in well over a decade.”

For the ones who don’t know Tommie Sunshine is on the scene for a long time now. We would like rememberer his massive collaboration with the phenomenal duo, Chocolate Puma which came out on Steve Angello’s’ SIZE Records called ‘Chicago Disco’.

Embodying the live for today mentality of the vocal and the artists themselves, the track puts an unmatched sound design and a relentless, upfront energy at its core to create a driving, dancefloor certified banger.

Charles D debuts on Factory 93 with ‘Heavy / So High’

“Tommie uses his influence and experience in such a good way to share quality music that may be overlooked otherwise. Without his input I probably would have given up on this track to be honest. I’m super happy to have him on board and just super excited to get the record out!” – Styline

The record, as expected, has received massive support worldwide and it has been played by Dannic, Blasterjaxx and tons more.