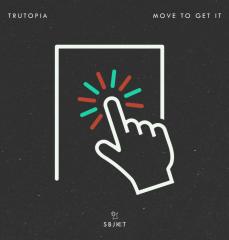 Armada underground division, Armada Subjekt, is delivering bombs in the last period and it seems they won’t stop as the last release ‘Move To Get It’ by Trutopia is another weapon.

Perfect for the dancefloor ‘Move To Get It’ features infectious rhythms and irresistible grooves adding to Armada Subjekt catalog even more fire. Laden with mood-enhancing vocals and spunky kick drums that push through no matter what, this cut is exactly what a party needs. The great mix of wide and deep kicks and subs gentle drive the top percussive loop.

Trutopia duo debuts on Armada’s underground division, Armada Subjekt, with groovy infected ‘Move To Get It’.

If you’re wondering who Trutopia were, they are a brother duo made by Ash & Kris based in London but born in the Welsh city of Swansea. After sleepless nights spent in the studio, the boys received a big welcome to 2018 with a charted release on Nervous Records (#1 in Beatport House releases), followed by big numbers on Cr2, Love & Other, and ToolRoom. Over the last year, they have shaken up dance floors in the UK, Ibiza & Sydney, thanks to their top selections, unique stage presence, and contagious enthusiasm.