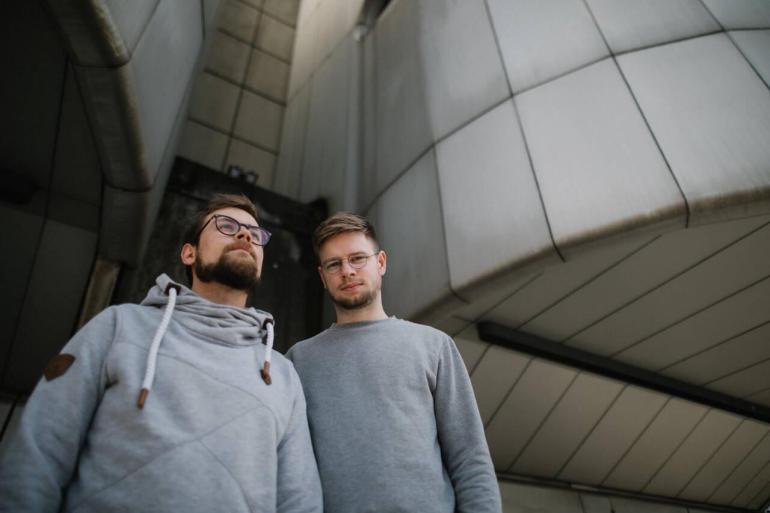 As musical acts of the same generation and country, pølaroit and Verboten Berlin’s sound both stand in contrast to the highly-produced and perfected aesthetics of their times. That’s why both soundworlds work so well together, with analogue organic touches animating otherwise hard-electro.

We love the imperfect, human touch and want to transport this feeling into electronic music. The basic idea of The Tide actually came about on our synthesizers. But we quickly realized that we needed an organic sound. For that, we had a bassist friend in the studio who recorded the bass line and a few effects for us. That’s exactly what creates the feeling of the song. – Pølaroit

Subtle build-ups and drops push and pull at the listener, with a ‘Re 201 Space Echo’ device used to give the track extra yearning. Finally, Verboten Berlin’s contribution ties everything together, with the oscillating vocals evoking lust at every note.

The soft piano in contrast to the pulsating drums and percussions and also the analogue synths create a dynamic atmosphere of “up and down”, therefore the title “THE TIDE” came naturally. The lyrics deal with the constant search for “balance”, to keep striving through the ebb and flow of life. – Verboten Berlin


In Pølaroit’s music, both space and time play a role. A felt connection to Jonas and Marius’ hometowns in Northern Germany, their geography, as well as a sense of pertaining to a specific instant in time, a generation, are both expressed in the duo’s strain of melodic deep house.

The name plaroit, which pays homage to both their northern roots (Polar) and the birthplace of techno, is a reference to this idea of capturing a moment (Detroit). Pølaroit’s debut EP, Expedition Into (out via Stil vor Talent) defined the duo’s moody sound somewhere in between melancholic downtempo and uplifting melodies and captivated audiences around Germany.

Pure, their second EP, released on Christian Löffler’s Ki Records, continued to explore the dichotomy of these two emotions, but with a greater sense of presence and liveliness this time around. Through the use of field recordings and vocals, pølaroit wants to rescue the human and organic element of creativity in their music, “Sometimes it’s just a recording of rumbling leaves or organic textures that make the sound more tangible.”