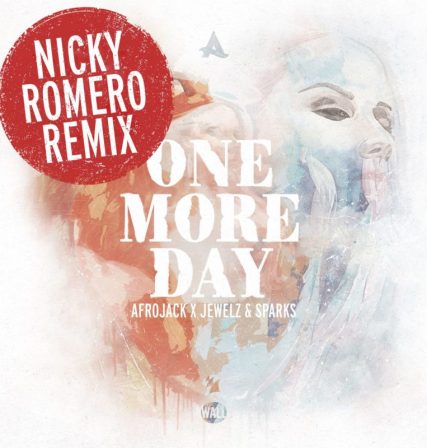 Afrojack‘s collaboration with the German Jewelz & Sparks, “One More Day”, has received a progressive house rendition from Protocol Recordings head honcho Nicky Romero. The Dutch producer has repeatedly declared his will to bring back progressive house, a genre that he never abandoned, despite the market moved to different sounds.

Premiered by the Wall Recordings head honcho himself at EDC Las Vegas (watch day 1 and 2)and played as the final track of his live set at The Flying Dutch last weekend, Nicky Romero‘s remix adds a fresh scent of magic to their latest offering, “One More Day“.

Despite that, fans still love tracks like “Reload” to be dropped at festivals’ mainstages, so Nicky brushed up his old soundbanks and composed this Big Room Progressive gem. Combining strings, classic synths and groovy basslines with the original, beautiful vocal, Romero’s remix of “One More Day” came just in time for the festival season: expect to hear this one a lot this summer.

The main man behind Protocol Recordings and a mainstay in DJ Mag‘s annual Top 100 DJs poll, Nicky Romero is one of the artists who’ve put dance music on the map across the world.

Thre mix is currently out worldwide and we suggest to not miss this masterpiece.