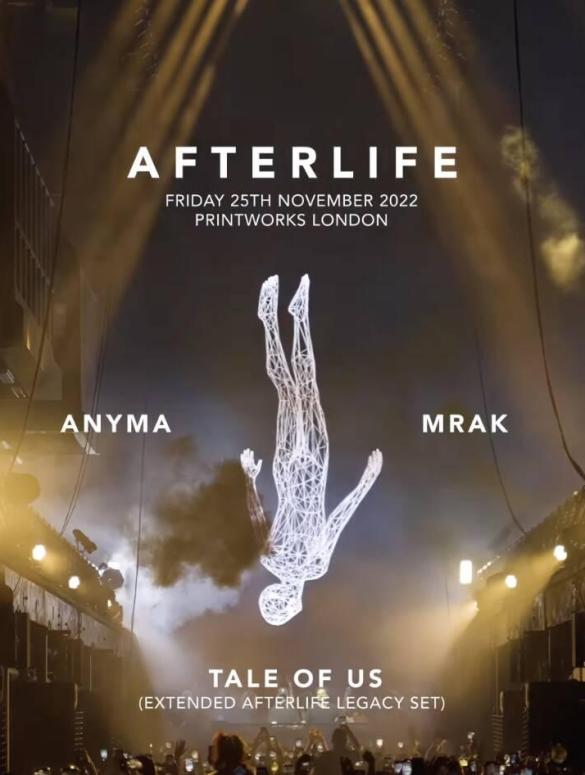 Afterlife announces third date at Printworks with Tale Of Us

For the first time Tale Of Us will play all night long at Printworks including their solo project, Mrak 5We Don't Follow’ and Anyma ‘Genesys’

The highly anticipated Afterlife events at London’s Printworks have been expanded to include a third performance; they will now be held on November 25, 26, and 27.

The supplementary event, which was planned as a way to thank Afterlife’s devoted followers and the Printworks crowd over the years, will include a very special line-up that includes two appearances: Anyma presents Genesys, the multi-disciplinary music & contemporary fine art project by Tale Of Us co-founding member Matteo Milleri, and MRAK presents We Don’t Follow, the solo project from Carmine Conte (the other half of Tale Of Us), followed by an exclusive Afterlife legacy set courtesy of Tale Of Us.

The highly anticipated performance of “Anyma presents Genesys” will have its world premiere at the Afterlife Printworks exhibit on Friday. Having already released some tracks to widespread acclaim, Anyma’s music will be augmented to new levels thanks to the creative technologies including real-time rendering of graphics and characters, with the boundaries between music, lights, and visuals – as well as reality and virtual – blurred in a never-seen-before immersive experience. Expect special guest appearances too – as well as previews of Anyma’s forthcoming debut album.

A live performance by Carmine Conte’s solo project, We Don’t Follow, will be presented by MRAK on Friday night. As an homage to composer and multi-instrumentalist Vangelis, the performance incorporates harmonizing analog equipment, improvisation, modulations, and digital sequences. The cinematic element of MRAK’s performance causes the audience to be completely immersed in the sonic experience.

After the duo’s two original members have each given one of their own special performances, Tale Of Us will come together to play an exclusive Afterlife legacy set to round off the evening.

How to get tickets for Afterlife Printworks 2022?

Tickets for the Friday night show are available from Thursday, 13th October at 13:00 (BST) via an exclusive pre-sale for those who sign-up. On Friday, October 14 at 11:00 (BST), all remaining tickets will go on general sale through the Printworks London website.