[vc_row][vc_column][vc_column_text]Fresh from the release of his debut studio album ‘Hyperfall’, Finnish DJ and producer, Yotto, hasn’t stopped releasing music: his latest gem is a remix of the classic dream-trance hit ‘Seven Days and One Week’. 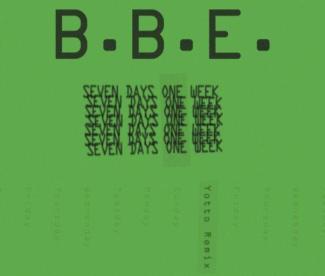 Originally released in 1996 from the italo-french act B.B.E. (which stands for the initials of its’ composers, Bruno Sarchioni, Bruno Quartier and the well-known techno producer Emmanuel Top), this tune shortly became a top-10 hit in various European countries thanks to the appreciation that the trance genre was receiving in those years. It reached the first position in Spain and the gold certification in Germany with more than 250k copies sold.

Yotto has revisited this classic in his own signature style: dark atmospheres, rolling basslines, progressive mood and a marked attention to every detail. The original dreamy vibe yet remains the same, but it’s combined with more modern dancefloor-oriented sounds.

2018 has been Yotto’s year for sure and it’s not finished yet. The Finnish DJ and producer, who made his BBC Radio 1 essential mix debut on Pete Tong’s show this year, has already left a footprint across the industry, gaining support from the likes of Kolsch, Solomun, Eric Prydz and Danny Howard en route to scoring 5 ‘Essential New Tunes’ and 3 ‘Hottest Records’ on BBC Radio 1. If you’re lucky, you will be able to catch Yotto around Amsterdam the 18th of this month because he’ll play Anjunadeep party during Amsterdam Dance Event.

‘Seven Days and One Week (Yotto Remix)’, which is currently out now on Positiva, has recieved a massively support in the last two weeks with plays from the lights of Tiesto, Sunny Lax, Pete Tong, Markus Schulz and many others.

Another massive release for Yotto to add to his already thick catalogue of sapiently crafted gems; stream or download ‘Seven Days and One Week (Yotto Remix)’ below.