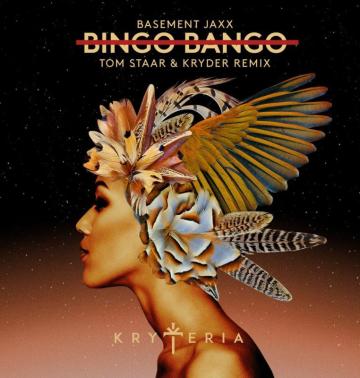 It’s been a long journey since the first play of this amazing remix (March 2017) but finally, after more than one year of waiting Basement Jaxx classic, ‘Bingo Bango’ has received its ultimate remix by the groove bosses Kryder and Tom Staar, out now on Kryteria.

After an incredible debut with the super collaboration between Kryder and electronic dance luminary Steve Angello, Kryteria Records returns with its third release that has nothing to envy the previous two. It’s Kryder and Tom Staar remix of Basement Jaxx’s ‘Bingo Bango’ which has seen the light for the big public more than one year ago, to be more precious during Kryder’s performance at Laroc Club Sao Paulo, Brazil. Since then the remix received unbelievable support and success in the scene, much to be played by Danny Howard, Dannic, Dave Winnel, Bob Sinclar, and Basement Jaxx themselves.

The remix expertly brings the original into 2018, maintaining the original charm, with the infectious ‘Bingo Bango’ vocal and piano midsection, while bearing the unmistakable hallmarks of Kryder and Tom Staar’s trademark house grooves. Already filled by Latin influences, the guys have complimented the record with tribal rhythms that ensure the remix is primed for the dancefloor, and bring the track to the present day in the process.

Originally released on their debut album ‘Remedy’ which reached #13 in the UK chart and #1 in the US Billboard Dance Club Songs chart,  Basement Jaxx’s ‘Bingo Bango’ was for sure a hit, and this new Kryder and Tom Staar version we are sure it will not be less.

Once again, the duo Kryder and Tom Staar do not cease to amaze and you can guarantee to hear the pair’s ‘Bingo Bango’ remix everywhere in the coming months, from the radio to the club.