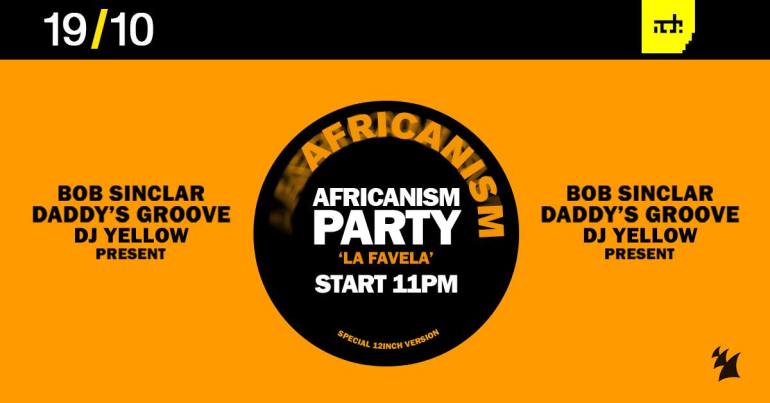 [vc_row][vc_column][vc_column_text]Born around 2000/2001, Bob Sinclar‘s ‘Africanism’ project will be back during the annual Amsterdam Dance Event 2018 with a special party together with Daddy’s Groove.

‘Africanism’ was launched at the beginning of the new Millenium thanks to the interest of Bob Sinclar who tries to bring together some of his friends DJ-producer of the caliber of Martin Solveig and DJ Gregory. The first record produced was released on Bob’s Yellow Records. Soon they will become famous thanks to their ability to mix house music with tribal and Latin influences becoming very popular in that period. In 2002 they released Africanism All Stars Mixed By Dj Gregory & Bob Sinclar which included, besides new songs by Sinclar and DJ Gregory, new exclusive tunes by a great range of artists.

Over the years the project seemed to be paused because, no press communication were made for an eventual ending but also, no more tracks or compilation were released until today; Bob Sinclar facebook page has announced a new chapter for ‘Africanism’ that will start in Amsterdam for the annual ADE conference with a special party.

According to the announcement made by Daddy’s groove themselves, ‘Africanism’ will be a new label, under Armada, managed by both Sinclar and Daddy’s Groove. After this announce the first speculations have started to appear and it seems that one of the releases of this new label will be Nico De Andrea’s ‘City Of Gold’. The record has been played massively by Bob Sinclar during his performances in Ibiza, mainly at Mambo.

For now, we can only wait for new information and, until then, you can save your ticket for the massive party set up for the 19th of October in Korte leidsedwarsstraat 28, Amsterdam.[/vc_column_text][/vc_column][/vc_row]