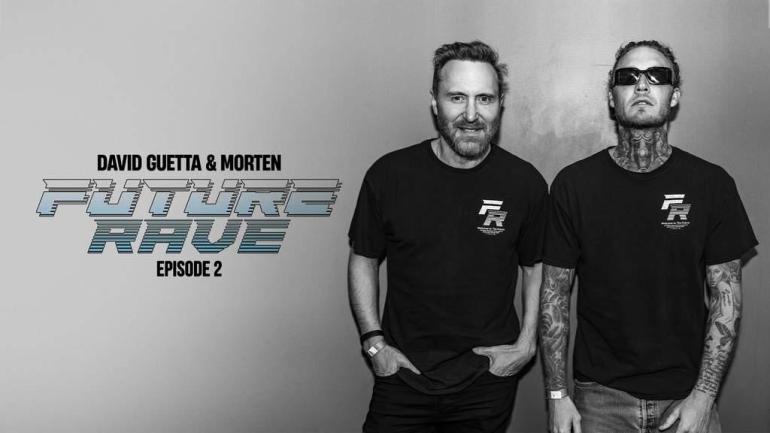 David Guetta and MORTEN have just revealed the release date for the debut EP under their new Future Rave label. This gorgeous, much-anticipated 5-track collection, titled “Episode 2,” serves as a refreshed credo for all this duo’s illustrious partnership stands for. David Guetta and MORTEN have demonstrated that the new genre’s meteoric rise is only just getting started with more than 20 releases, more than 500 million streams, and a residency at Hï Ibiza. With their very own Future Rave label and a brand new EP, the duo is taking their trademark sound to new heights.

One of Guetta’s favorite collaborators, RAYE, contributes soaring vocals to the album’s lead single, “You Can’t Change Me,” which contrast sharply with an old-school trance rhythm buzzing with dark intensity. The dichotomy of a song with “radio hit” written all over it and a gigantic big room track is truly intriguing.

One of the EP’s toughest tunes, the recent hit “Element” hammers forth a harsh techno attitude. Together soars to the heavens with its blissed-out vocal and dramatic, twisted lead sounds, while “Solar” ventures into more ambient, pared-down territory with its introspective darkness. The compilation is rounded out by the epic trance breakdown found in “Dominator,” which is accompanied by brutal hard dance synths and a pulsating tribal-techno rhythm.

After spending the entire summer in Ibiza and playing the new tracks at my Hï Ibiza residency, I couldn’t wait to release them! I’m really happy that we got to work with RAYE again, her voice is absolutely perfect for ‘You Can’t Change Me’ and I love how the track turned out. This EP and our own label is a new chapter for Future Rave, and it’s amazing to see how much impact the sound we created is making! – David Guetta

The goal of Future Rave the label is to encourage and support the generation of producers who have been influenced by Guetta & MORTEN’s continuous joint endeavor and who have contributed to the development of future rave as a distinct musical subgenre. This debut EP establishes a very high standard and warns potential musicians that they must perform at the top of their game in order to join the label’s expanding family of producers. The duo hope it will provide more inspiration still and lead to the next evolution of their burgeoning genre.


I’m really excited to be releasing a second Future Rave EP with David. We’ve been playing a lot of these tracks over the summer, together during our residency at Hï Ibiza but also at festivals all over the world so I think a lot of people will recognize the tracks. The fact that we are able to release this EP on our own label makes it extra special! I can’t believe that what we started 3 years ago has turned into something so huge! – MORTEN

Alok teams up with ÜHÜ for ‘Surrender’ on CONTROVERSIA

The previous three years have seen the release of the ground-breaking “Future Rave” sound by Danish phenomenon MORTEN and world-famous superstar DJ & producer David Guetta. The imaginative genre, which grew out of their desire to include something original in their sets, reflects their outlook on the direction that electronic dance music is headed: forward-thinking and creative. David & MORTEN have made it their trademark to bring sounds and formats from the underground and show it to the general public because they are both profoundly influenced by it. With Future Rave, the duo combines the greatest aspects of the underground and EDM cultures while maintaining a cutting-edge sound that is constantly growing. Future Rave builds bridges between the energy and the hooks of EDM, the futuristic sounds of techno, and the emotion of trance and (future) house.

David Guetta and MORTEN brought Future Rave to the legendary island of Ibiza for an astounding 18-week residency at Hï Ibiza following a sold-out US tour that saw the duo perform at Exchange LA, Brooklyn Mirage, and in front of millions on the mainstage of EDC Las Vegas.

DJs all over the world are embracing this new age in dance music and incorporating its hard-hitting sound into their sets, which is supported by the entire industry. Future Rave isn’t just a sound, it brought a wave of new energy to the DJ community and created an entirely new culture amongst fans of electronic dance music.