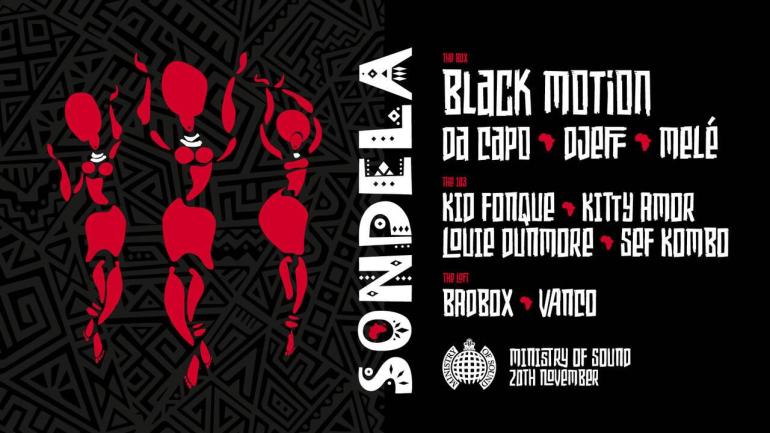 Sef Kombo and Louie Dunmore‘s Sondela label will host its debut showcase at prestigious London nightclub Ministry of Sound on November 20th, showcasing a host of Afro-house talent in the capital, capping off a successful first year.

Black Motion, one of South Africa’s top house artists, will headline the show, which will also feature Afro tech star DJEFF, DJ Mag’s Afro House DJ of 2019 Da Capo, and Club Bad founder and long-time friend of Defected Melé. The evening will also feature sets from London Afro-house champions Sef Kombo and Kitty Amor, who are expected to be highlighted. Sondela’s A&R Louie Dunmore, Badbox, a resident of Black Coffee and Blue Marlin, and South African star Vanco – the duo behind Sondela’s latest single ‘Alive‘ – round out the lineup.

All proceeds from Sondela’s recordings go to South African organization Bridges For Music, non-profit gathering key players in the music industry to support responsible progress in developing countries, which was launched in February 2021 as part of the Defected family of labels. With releases from Hyenah, Native Tribe, Enoo Napa, Benny T, and more, their records have garnered tastemaker support from the likes of Black Coffee, Kitty Amor, Pete Tong, Âme, and Dixon, swiftly becoming a must-know label for discerning selectors. Sondela, who has been featured in publications such as Mixmag, BBC Radio 1 and 1Xtra, Resident Advisor, and DJ Mag, are gearing up for their eighth release on the imprint as well as the Ministry of Sound event, as the brand continues to thrive and break new musical ground.

Making a statement with its first event in the label’s hometown by taking over a venue as iconic as Ministry of Sound, partygoers heading to the event in November will be able to experience the breadth of talent across Sondela’s international roster at a venue with world-renowned production capabilities, steeped in house history. This party has all the makings of a night to remember, with co-label head Sef Kombo at the helm, having celebrated a decade of throwing his highly popular Til Two parties, as well as Defected’s expert team of event coordinators.

Tickets for Defected presents: Sondela on 20th November at Ministry of Sound are now available at defected.click/SondelaMOS