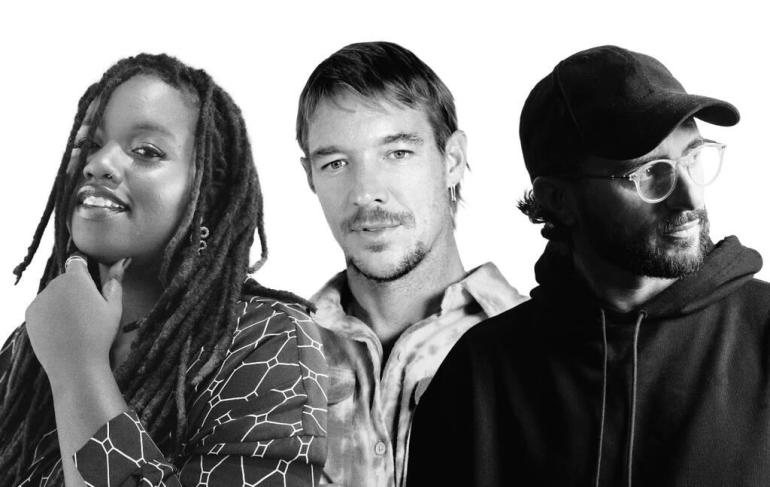 This time, the sonic triple-threat focuses entirely on the widescreen vision. With rousing piano chords and Kareen’s soaring vocals, ‘Promises,’ which has just been hailed as Clara Amfo’s Hottest Record in the World on BBC Radio 1, announces itself as a life-affirming, gospel-driven house jam. The song was recorded in a variety of locations around the world, including Diplo’s LA studio, Peter Gabriel’s Real World studio complex in Bath, and finally London’s iconic Abbey Road, where The Spirituals gospel choir was brought in for backing vocals.

It comes on the heels of the trio’s first platinum-selling collaborative hit, ‘Looking For Me,’ which peaked at #4 in the UK Singles chart, spent three weeks in the ‘Top 5’, four weeks in the ‘Top 10’, and has amassed over 200 million combined streams to date – the record is also Gold in Australia.

Diplo, born Thomas Wesley Pentz, is one of today’s most dynamic forces in music. He is a legend in his own right, as a member of Major Lazer, one-third of LSD, the psychedelic supergroup with Sia and Labrinth whose debut album has been streamed over 3 billion times, and half of Silk City with Mark Ronson, whose platinum-certified ‘Electricity’ with Dua Lipa topped charts worldwide and won a Grammy. Higher Ground, his pioneering label founded in 2019, recently released singles ‘Don’t Be Afraid’ with Damian Lazarus and Jungle and ‘One By One’ with Elderbrook and Andhim. They are following three Americans. The Grammy-nominated SIDEPIECE collaboration ‘On My Mind,’ ‘Looking For Me,’ and ‘Turn Back Time‘ with Sonny Fodera were all dance #1s for Diplo and the label. The ten-time Grammy nominee has also collaborated with megastars such as Beyoncé, The Weeknd, Madonna, and Bad Bunny, among others.

Paul Woolford, a legendary DJ and producer in his own right, has spent his entire life redefining and reinventing all forms of dance music. Currently riding a wave of success and enjoying the most successful period of his career, you’re just as likely to hear his work at a club or festival as you are on the catwalk or in the theater, such is his cross-cultural engagement. He has worked with a fascinating array of artists, creatives and brands from across pop culture including Virgil Abloh, New Order, Fendi, Depeche Mode, Givenchy, Dua Lipa, Chemical Brothers, François Kevorkian and many more. Along with the music he releases under his own name, he also creates under the Special Request moniker, which serves as a vehicle for experimentation with a more underground focus.

Growing up surrounded by an eclectic mix of music influenced by her surroundings and those close to her, Kareen Lomax first blew up with her track ‘Melatonin,’ and has since gone on to write for Maroon 5 and others. Kareen’s new project, Hard Feelings, is something of a homecoming for her after being disillusioned with the industry and relationships in the past.

‘Promises‘ is more than just a follow-up; it is a demonstration of the synergy of true collaboration taken to its logical conclusion when three artists in different positions come together.