This year, the electric sky was literally lit up by hundreds of multicolor lights. According to some sources, the number was as high as 600. 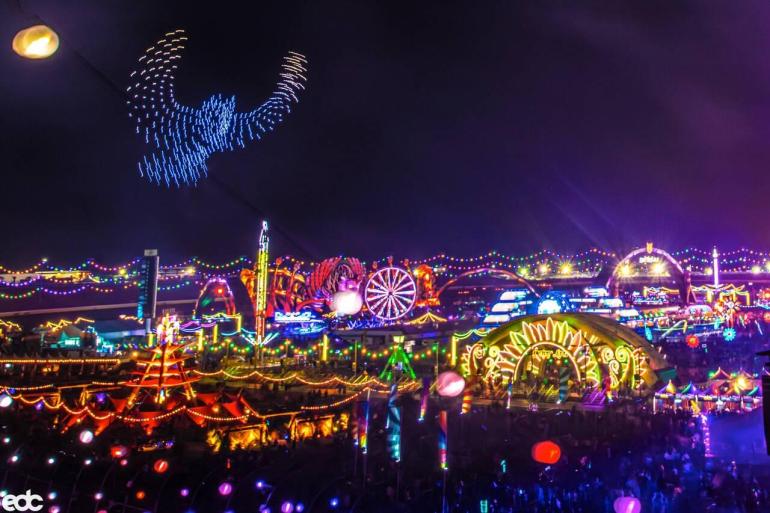 For the first time in a Western festival, Electric Daisy Carnival Las Vegas 2021 has used drones, besides fireworks, during the opening ceremony.

Despite being the last day of EDC, we can’t underline how incredible has been until now. Outstanding performances, world-class artists, and phenomena lights and visual effects have made 2021 EDC Las Vegas one of the craziest of all time. This year Electric Daisy Carnival was even more important for a reason; 2021 marks the 25th anniversary of EDC Las Vegas in its iconic location of the Motor Speedway. To celebrate the milestone, EDC has decided to go all in. Lights, lasers, fireworks, and, this time, even drones.

Electric Daisy Carnival EDC Las Vegas 2021 has been one of the few festivals in a Western country to use drones. How you may ask? Every drone was equipped with RGB LEDs and, making them fly in synchronous, hologram-like images appeared in the sky. The electric sky, this year, literally lit up with hundreds of multicolor lights. According to some sources they were up to 600.

The drone shows lasted about 5 minutes; initially, drones formed the EDC logo, the iconic owl. Then it turned into the silhouette of the iconic cathedral stage to finally display the EDC 25th anniversary logo. Mor effects and images appeared before the incredible fireworks display.

The people behind the drone show.

The show has been brought by Drone Stories, an Amsterdam-based creative team focused on delivering incredible performances with drones. They provide art direction, storytelling, design, and animation. They are able to fully operate a drone fleet from 200 – 1000+ drones including professional film registration. Drone Stories next major show will be at EDC Orlando in November so, make sure to keep an eye on the sky.

In the past, Studio Draft delivered a similar performance during Burning Man. 600 luminous drones rose into a hypnotic display of technological choreography. A similar performance happened during Coachella 2018, where the Odeza set had a special drone performance in the sky thanks to intel.

The video of the whole show is available below. This year Electric Daisy Carnival Las Vegas is also live streaming from all 7 stages. The live stream is available worldwide here. A lot of artists have played tons of IDs and new music. We suggest checking over Alesso with his new Rave All Night.