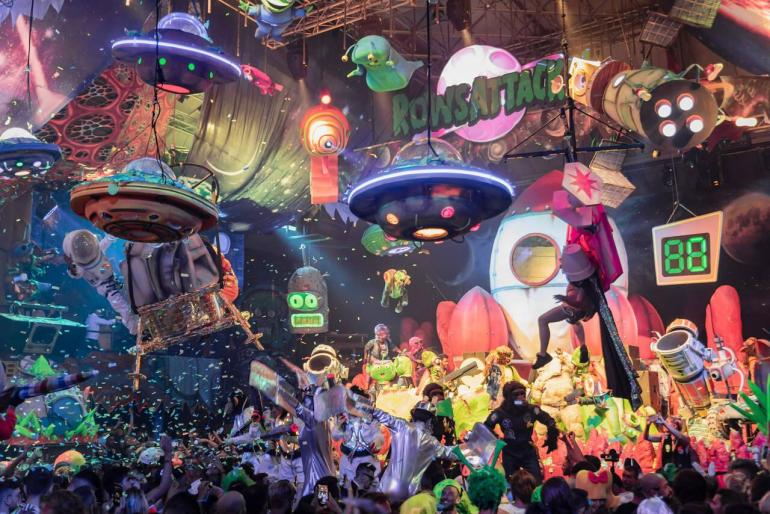 Following the massive success of their North American return for the July 2021 sold-out 10-hour extravaganza, today international party purveyor elrow announces the phase one lineup for the next New York edition of its otherworldly Rows Attacks! part of the North American tour. Rows Attacks! is a mothership-sized party that also includes dates in Chicago (November 20) and Miami (December 4). The theme of the event is a classic homage to the absurdism of 1950s sci-fi pop culture. Tickets here.

elrow is known for its out-of-this-world extravaganzas featuring some of the most original themes, performers, and the trendiest global house music DJs, and all of these elements will be on display in full force as the event conquers the continent. Expect intergalactic sounds from the world’s best DJs, interactive cosmic acrobat performances, out-of-this-world art, and fellow aliens dressed up for the occasion from all over the galaxy.

Elrow’s strength stems from its reputation as one of the most sought-after experiential events in the world, with NPR dubbing it “the leading adult clubbing brand.” Elrow has steadily expanded its footprint in the United States, growing in notoriety and reputation, since its 2016 debut in NYC, which drew 800 attendees. As it enters its fifth year of residency in New York, it now draws crowds of over 5,000 people per show. The New York Times lauded it as an “art and music extravaganza… a roaming celebration that is part Cirque du Soleil, part Alice in Wonderland.” With North American residencies in New York and Las Vegas, elrow hosts the world’s craziest parties right now.

Elrow is hailed as the best party in Ibiza, with residencies in Madrid, London, Dubai, and Amsterdam. Additionally, the mighty elrowTown traveling festival will visit four cities in 2019: Antwerp, Amsterdam, Edinburgh, and London. elrow has consistently broken attendance records with over 2 million people attending 134 shows hosted across 65 cities in 33 international territories.

Elrow has taken the world by storm with the most outrageous and hilariously over-the-top environments at their shows, which has been a major factor in their meteoric rise from a small Spanish party based in Barcelona to a global entertainment powerhouse with residencies in over 80 cities across six continents.