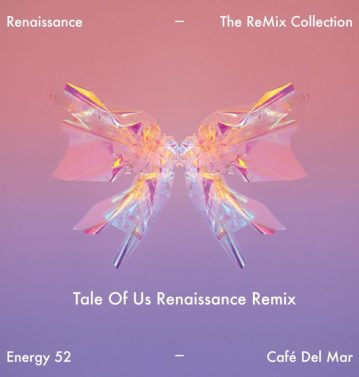 One of the tracks that defined the golden Trance era, between the 90’s and the 00’s, was without any doubt “Cafè Del Mar” from Energy 52. This tune, originally released in 1993, became a hit four years later thanks to the well-known remix from Three ‘N One.

Throughout the years, many artists took the original melody and rearranged it to adapt it to the current times: deadmau5, Ricardo Villalobos, even Dimitri Vegas & Like Mike. Italian duo Tale Of Us is one of the most appreciated techno acts in the world, and recently released their personal “Renaissance” version of Cafè Del Mar.

As usual, the Milanese duo takes you on a journey between techno, trance and progressive vibes: heavy basslines counterpart dreamy arps ’till the signature melody comes in before the breakdown, which is pure magic. The uplifting experience comes to its’ end when the raw drop kicks in and restarts the dance. This remix is fated to soar among the others as one of the best works ever done by Tale Of Us.