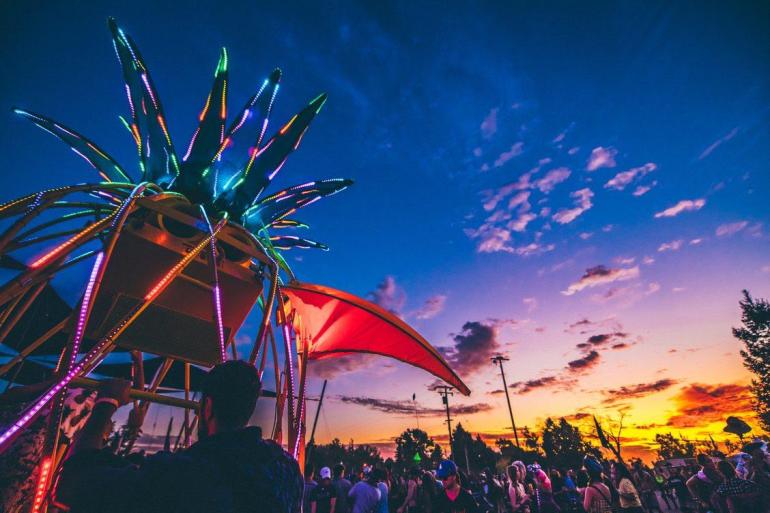 A DJ with a dream named Claude VonStroke decided to break away from corporate raves a few years ago to create a crazy, far-out summer camp showcasing his record label’s spicy independent flair. This new independent festival was fueled by the best music and a sense of hilarity, providing a home for his small but mighty community. After seven years, Dirtybird Campout has established itself as the best boutique festival in the world, bringing together wild ones and weirdos, music heads, and party animals to forge their own path. Come see what all the fuss is about on October 15-17 at the Modesto Reservoir Campgrounds in Central California.

As soon as you arrive, ravers flock to Games HQ to pick up their Color Team bandanas, and the campout begins. The Orange, Green, Purple, and Red teams compete in over 15 events over the course of the weekend for the now-famous Iron Bird trophy. All of the artists are involved, so you can compete on the dodgeball court, swim for the finish in the 5km Floaty Race, test your strength in Tug O War, and so much more, all in the pursuit of the winning color team.

The spirit of competition isn’t limited to the playing field. Strangers and fame-seekers will congregate at Claude’s Cabin. Fans and artists can participate in a variety of activities, including the Talent Show, Beatboxing Competition, Pie Eating Contest, Deep House Yoga, Camper Comedy Hour, and Late Night Bingo, where they can compete for huge prizes. Every year, well-known comedians perform to ensure that the audience is thoroughly entertained.

Day Zero and Crosstown Rebels boss Damian Lazarus, a special guest who helped break Claude VonStroke at the start of his career and most recently remixed the Get Real super hit “Jolean,” will perform at Thursday’s Early-Arrival Pajama Party. (On this special night, Claude will even perform the warm-up set.)

Claude will be joined by the hard-hitting sounds of German giant Boys Noize, Turbo Records dance legend Tiga, Polish house producers Catz ‘n Dogz, and label favorites Walker & Royce, Ardalan, Worthy, and Sacha Robotti on the house-focused Birdhouse stage. The next generation of Dirtybird will also be on display, with VNSSA, Nala, Steve Darko, and Lubelski putting on standout sets. DJ Heather, Worthy, DJ Minx, Gene Farris, Hector Romero, and others will be among the true house pioneers who will take over the camp.

Clear waters perfect for swimming, RV hookups against the lake for amazing views, showers and bathrooms, and much more are all available at the Modesto Reservoir Campgrounds. Faster load-in times, denoting which a specific number of campers are assigned to their Group Camping ticket spot or RV Hookup location, and ensuring that water is available throughout the festival area will all be improvements for 2021. The new and improved boutique camping experience welcomes campers seeking a ready-to-go experience to a special location behind the Bass Lodge, where they will have their own parking, luxury bathrooms and showers, fresh ice delivered to their cooler each morning, guaranteed silent disco headsets each night, and real beds to rest their tired heads.

When you come to Campout, you enter a world where your interests are paramount and positivity is the preferred currency. It’s a place where no one is too cool to have a good time, and where the music speaks for itself. For the party of the year, join Claude VonStroke and a nationwide community of campers.

Tickets to the festival are now on sale and can be purchased on the Dirtybird Campout website.