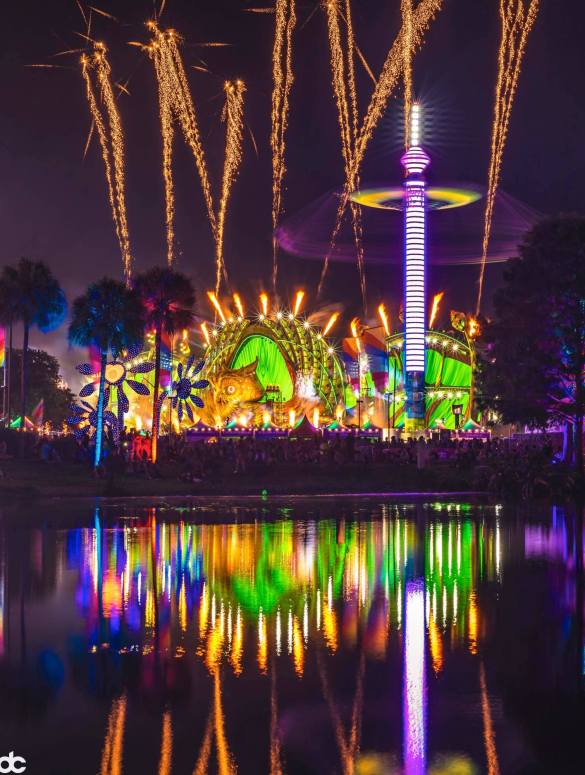 Six shows are planned for this year's EDC Orlando: The Opening Ceremony, Calm After The Storm, Your Inner Growth, The Flow Of Life, 25Y Celebration show, and Acrylic Rainbow.

Today is the last day of Electric Daisy Carnival EDC Orlando 2021; the festival celebrates the 25th anniversary and, besides bringing the usual massive lineup, EDC has delivered an insane visual show during all three days. From fireworks to lights and lasers effects and even drones, the EDC Orlando 2021 has defiantly raised the bar.

Six were the shows planned for this year’s edition in Orlando. The Opening Ceremony, Calm After The Storm, Your Inner Growth, The Flow Of Life, 25Y Celebration show (drone show), and Acrylic Rainbow.

As the title suggests, the show was a crescendo both with the music and the light effects. From a dark stage, mainly colored by cold colors, the show evolves bringing high energetic beats and tons of fireworks. The electronic downtempo drop synched with the fireworks completes the Inner Growth.

The Flow Of Life.

Built around water and the actual flow of fluids, the stages have been illuminated by blue, cyano, and light blue. The fountain on the front moves along with the music which is cinematic and in some instances deep and chill. The organic sounds flow through the crowd peaking at the end with an incredible laser and fireworks show, paired with down-tempo beats.

As the 25th-anniversary celebration show, Acrylic Rainbow brings back the drones in the sky. Fire and red colors collide with the deep blue of the water; both mix together in rainbow explosions. The laser shows merge with the fireworks and high energetic music delivering an incredible full-rainbow of colors on the stage.

The full 25th-anniversary celebration drone show is available on our dedicated article.