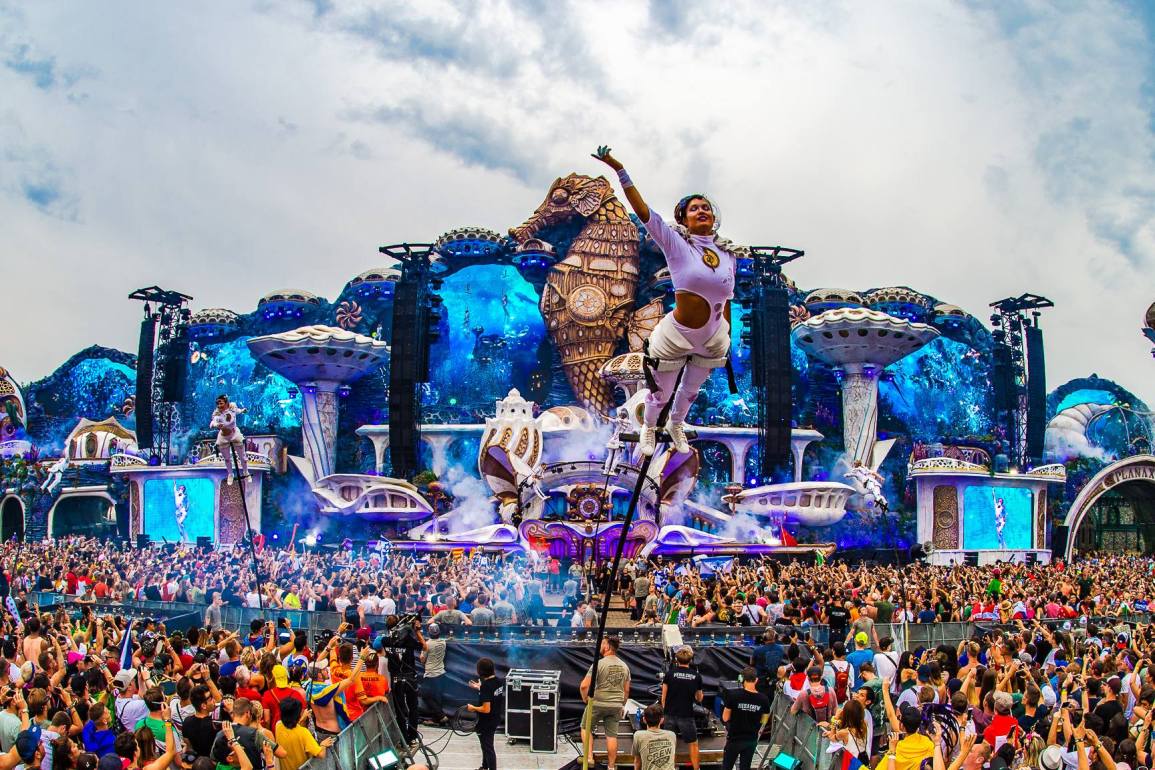 From the underwater adventure called the Main Stage (check the live-stream) to the towering mushrooms at the Youphoria: before the celestial gates were opened, the festival team walked along all stages of Tomorrowland 2018.

What the Main Stage of Tomorrowland 2018 looks like, we should not tell you. But allow us to call this fantastic scene from The Little Mermaid the most beautiful main stage in the history of the festival.

A width of 115 meters and a height of 28 meters did not actually tell us much in advance until we looked into that gigantic seahorse, and thousands of sea creatures swam towards us. The number of LED screens has nearly doubled compared to last year, but the eye-catcher is the 290-meter-large water basins, with a running water wall of sixty meters. Did anyone recently say that we have to be careful with water these days?

Anyway, they have a good excuse: The Story of Planaxis, the theme for this year, is all about water. And we will only assume that they have pumped the water from the ponds of De Schorre, surely?

Such an impressive name can only accommodate an impressive stage, and the Theater Formidable does not disappoint. For the first time, a stage, decked out with an antique horse carousel, was placed in the middle of the audience – to reinforce the intimate atmosphere between superstar DJ and his followers. Fun fact: the lion’s share – the horses’ part – of the DJ booth consists of recycled elements from the Main Stage last year.

The last 34 tons heavy dragon that we were impressed was our own debut novel. Although Tomorrowland’s is more of a fairy tale than a tragedy. The steel animal that rises from the water moves, flashes with the eyes, and smokes smoke and rose scent over the People of Tomorrow. Yes, you are still at De Schorre in Boom, and not in the Efteling.

Surrounded by blue-green algae, the Harbor House looks like the name suggests: as a fairytale hut that could just stand on the Zoutelande. For three days and two weekends, you will hear the best of the past and present.

In 2017 Tomorrowland committed style break – shame! – by purchasing a classic red and white festival tent. That modest approach was atypical, charming, and short-lived. Tomorrowland is once again picking up the Big Means this year, with a tailor-made crane arm at six giraffes – 32 meters high! The tent is, next to the Main Stage, the eye-catcher of this edition. 120,000 LED lights sparkle inside, while you are blown away in the background by the beats of Adam Beyer, Richie Hawtin, and Ida Engberg.

Why one floating stage if you can also have three, though the architect of Tomorrowland, which in the past months probably literally got too hot under his feet. Besides the Garden of Madness and the Leaf Stage, you can now also gobble on the waves in the Arch, a setup that would not be out of place in a reproduction of the opera Tosca, but which was simply put down for your entertainment in De Schorre. Golden lion heads. Fire-breathing chalices. Romanesque architecture. In short: a stage with so many Versace vibes that even Migos would be uncomfortable, but where Yves Deruyter and Pendulum will undoubtedly feel at home.

If someone texting you “I’m sitting on the mushrooms”, do not start to panic. (However, if you run into froth-catching friends, point them in the direction of first aid.) With Youphoria, Tomorrowland picks up a stage that is easily recognizable by the seven giant mushrooms that rise above the DJ booth. Coincidence or not: Ricardo Villalobos and Sven Väth play mainly DJs that consume you the best when you’re out of the world.

Somewhere at the intersection where origami and the Japanese garden of Hasselt meet, Core came to life. In the woods of De Schorre a walkway leads you to a wooden construction that we suspect is bamboo. Or so. Jamie Jones, Andhim and Patrick Topping play here. Let’s hope they – our sincere apologies! – cut from the right wood.

Tomorrowland is an almost religious experience for some people: they kiss the grass when they first come to the field and throw their arms in ecstasy. The Organ of Harmony, a stage that was brought into being last year, is very useful. Stained-glass windows, tubes with flowing holy water, and goddesses like Dua Lipa and Coely on a pedestal. Martin Solveig – on David Guetta after the closest that the EDM world comes to a Jesus figure – gives the final speech on Sunday evening.

For hypersensitive people it is probably worse than a non-stop course of ‘Zoutelande’, for techies it is heaven: Freedom Stage is the place where you get blown off your sneakers – even before you act like Tiësto, Fatboy Slim and Dimitri Mike & Vegas Like get that chance. The 1400 square meters of moving LEDs give you, according to our enthusiastic fellow man, the feeling that you are in the best club in the world.

Togetherness, that’s what it’s all about at Tomorrowland for fourteen years, and this year the festival is not only trying to bring the visitors together in their love of music, but also in their grief. On the Bridge of Tomorrow, a commemorative monument for the deceased prodigy Avicii was established.