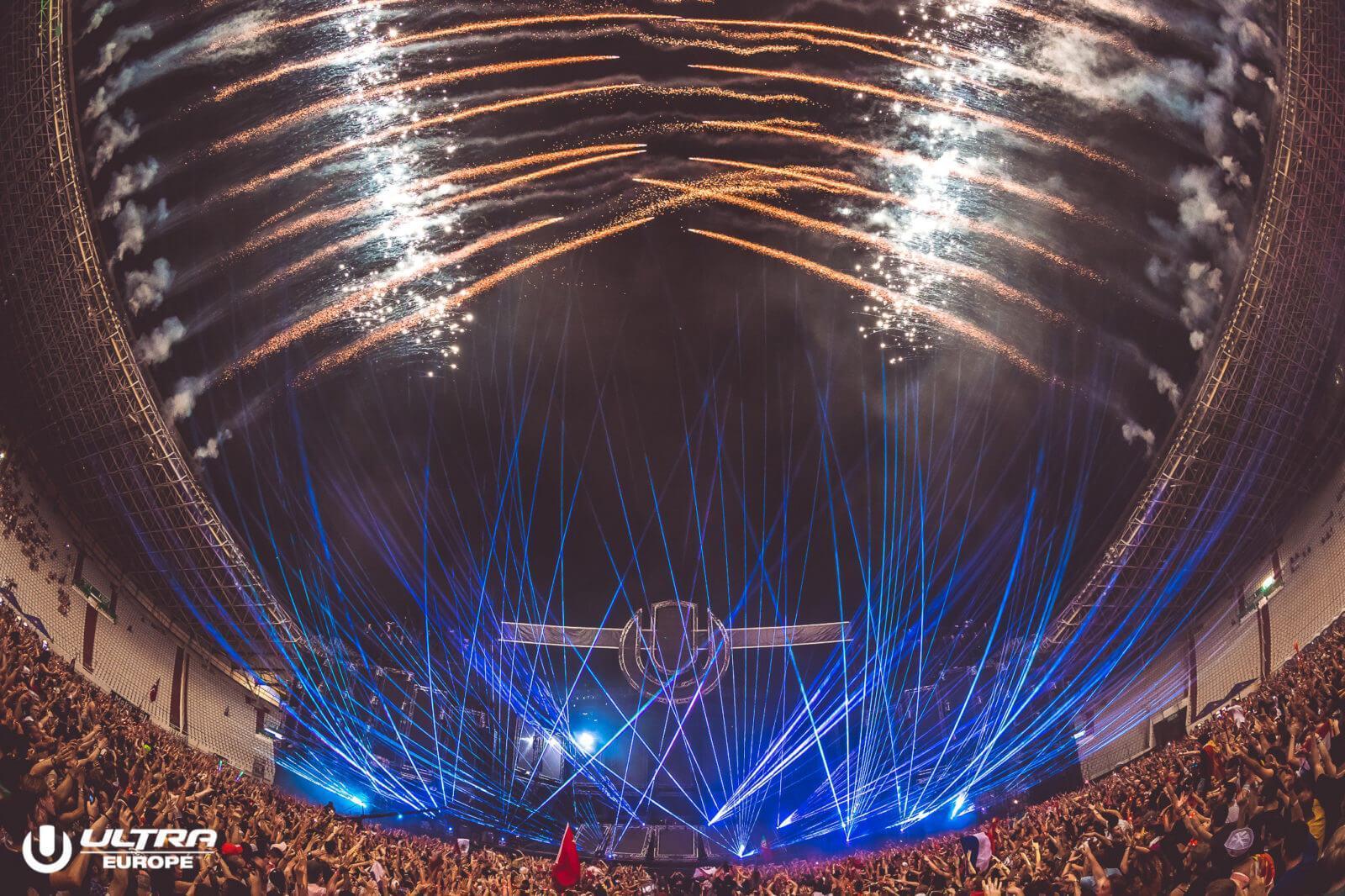 Be ready for the European edition of Ultra Music festival with our guide covering schedule, lineup, transport and more.

When you think about the Ultra Music Festival, Miami is surely the first thing you got in mind but, we can’t forget that Ultra has an entire series of festivals around the world. Ultra Europe, in the beautiful city of Split, Croatia, is one of them. Below you can find out guide to enjoy at its best the festival knowing everything you need.

When and where Ultra Europe will take place?

Ultra Europe will run from the 12th to 14th of July 2019. The festival will take place in Split, Croatia. Besides the various rumors about a new location,

Ultra Europe has officially announced the relocation to Mladeži Park. Even if the stadium itself is smaller than Poljud, the surrounding area is way bigger and almost 200.000 people are expected for the event.

Where can I buy tickets?

You need to know that, besides the main festival, Ultra in Croatia has a full week of parties. Destination Ultra includes RESISTANCE Split, Ultra Europe main festival, Regatta party, Ultra Beach, Resistance Hvar, and Resistance Vis. Of course, every single of these parties has their own ticket and prize. You can still buy your Destination Ultra ticket for a full 7-day experience.

For more information and all the tickets option and to buy them, follow this link for Ultra Europe official website.

We always suggest you to NOT buy tickets from third-party vendors to avoid any issue at the festival’s gates.

How can I reach Ultra Europe?

Split as well as the Poljud stadium are easily reachable. Poljud stadium is located in the middle of the town at only a couple of km from the train station. Split has also its own airport, which is a bit far away from the town.

Luckily, Ultra has set up am efficient shuttle bus service which will bring you from Trogir (through the airport) and Omis to the stadium.


One purchased ticket will allow unlimited access on any of the routes in period July 10 – July 16, 2019 (7 days). This means that if you have friends staying in another place you’ll be able to visit them for no extra cost. Also if you want to hit the beaches or check out any other attractions in and around Split, all you have to do is look at the map and hop on any bus that’s heading that way.

The first artists will start playing at 19 (7 pm). The closing is set for the 5 in the morning (5 am). We suggest you to arrive early at the gate to avoid any sort of waiting time.

What’s the lineup and the performances’ timetable?

The full lineup for Ultra Europe 2019 has been revealed featuring the biggest artists of the scene. From the highly awaited return of the Swedish House Mafia to names such as Alesso, DJ Snake, Rezz as well as high weight techno artists like Adam Beyer, Carl Cox, and more, this year lineup is for every taste.

The set times are available via the Ultra Worldwide App. You can download it for free on the App Store or the Google Play. Click here to download. You can also check below.

Where are the stages located and how they look?

The worldwide stage won’t be during this year Ultra Europe. 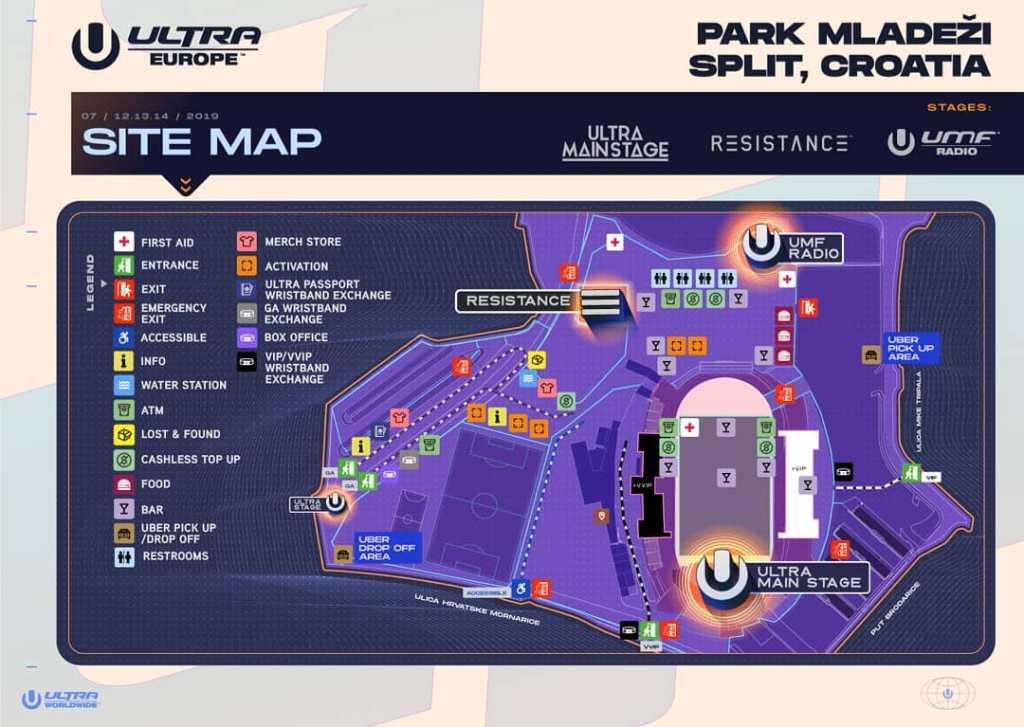 Photos of the stages will be available once works on the festival ground will begin. 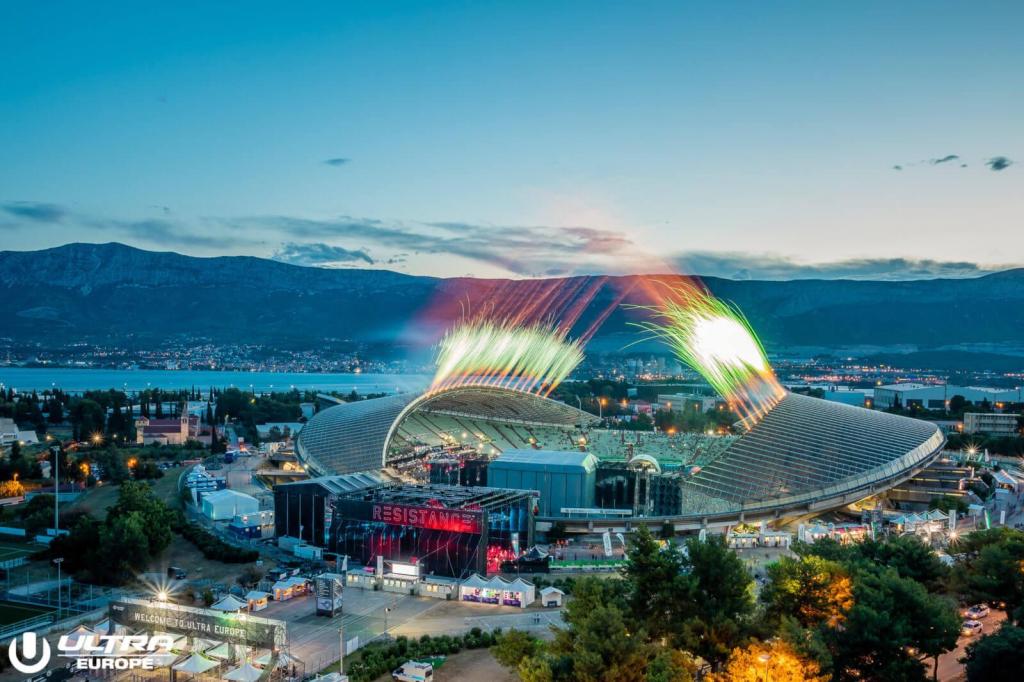