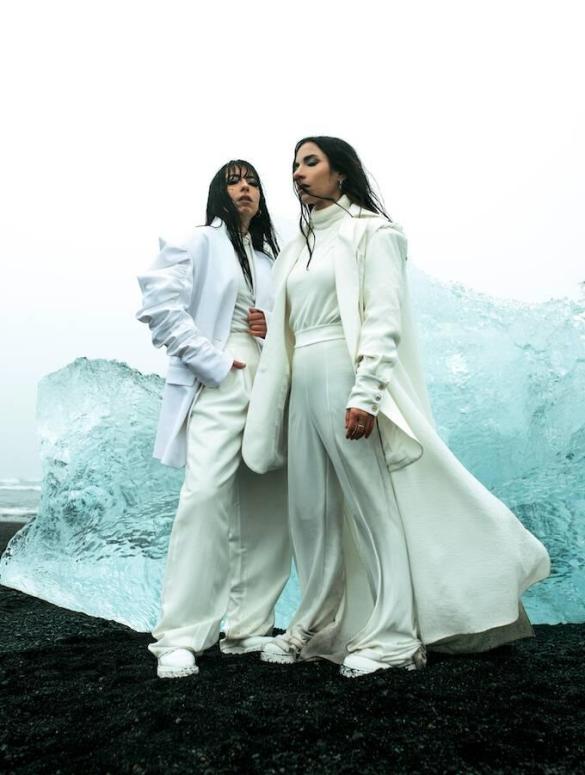 Giolì & Assia return with another flawless production in the form of ‘Silence,’ just a few weeks after releasing the title track of their upcoming album. To coincide with the single’s release, the multi-talented duo have also delivered a sublime #DiesisLive, from the Fjallsarlon Glacier Lagoon in Iceland, both of which are available to stream now.

Racking up millions of views around the world with their now legendary #DiesisLive series, which sees the duo perform in remote and jaw-dropping locations, Giolì & Assia have filmed a series of awe-inspiring chapters in one of the world’s most beautiful countries. The new setting is a stark contrast to the fiery forms in the dark, ashen landscape of the Fagradalsfjall volcano video, as the pair transform into white pure figures that echo their glacial surroundings, serving as a visual exploration of the album’s title ‘Fire, Hell & Holy Water.’ Giolì & Assia give a raw and emotive performance of new single ‘Silence,’ as well as premiering not one, but two tracks from their forthcoming album shot from the icy tongue of the lagoon.

We spent 9 days here in Iceland! At the beginning this was just an impossible project even to think about, but after these 9 days we can finally say we moulded it into reality! We brought all our team here in Iceland, but more than a team they really are true friends and special people for us. They helped us make our dream possible with supporting our craziness every single day; without sleeping, eating, making long hikes, and putting in all their effort! Nothing was taken for granted! We toured most of Iceland, experiencing the most beautiful sunrises, colouring our eyes with joy after long runs, filling our lungs and souls breathing the purest air in the middle of huge canyons, drinking water from glaciers, and danced under the coldest rain and laid on greenest grass just simply looking at the stars! This trip really made an impact in our lives, and we’ll be always grateful for it! We chose the craziest, most remote, pure, raw and surreal locations to shoot all our new album videos! Let us say this, you’re not ready for it!!! You’re not ready for this album! – Giolì & Assia

‘Silence,’ out now on Ultra Records, begins with their signature melodic handpan, as Assia’s smooth and luxuriant vocals entice listeners into the dreamy soundscape, before dropping an ethereal minimalist drop. ‘Silence,’ which continues to raise the bar with each release, is yet another example of the duo’s undeniable star power.

Giolì & Assia have perfected the art of delivering sublime and emotive soundscapes that capture the hearts of their legions of fans worldwide. They are without a doubt one of the most innovative and captivating acts in the music scene today. The diverse duo’s upcoming album is a labor of love that will further showcase their unparalleled sound. They are known for their ability to blend a variety of genres with a broad range of instruments.