Google also spoke with Tim's father, Klas Bergling, to remember Tim on this day and learn more about mental health 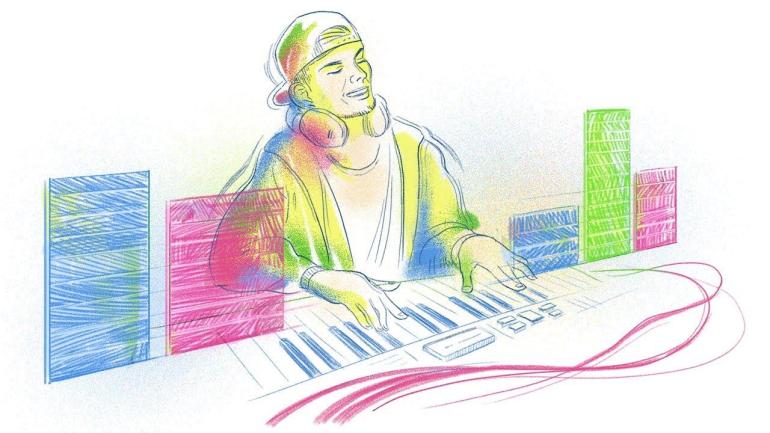 Starting midnight EST Wednesday, September 8, Google will be celebrating world-famous music producer and DJ Avicii’s 32nd birthday with a Doodle in over 46 countries, which is a temporary change to the Google logo on the home page. A music video depicting significant moments in his life will be included with the Doodle, as well as a Google Blog post.

The doodle which falls during the same week as “World Suicide Prevention Week” aims to commemorate Avicii’s (Tim Bergling) career, achievements, and contributions to music which left a big impression on the world. Doodle artist Alyssa Winans has created a video based on the song “Wake me Up” with sketched scenes from Tim Bergling’s life to celebrate and pay tribute to Tim Bergling’s life and musical heritage.

Commemorating the life of the most influential visionaries of electronic music

On what would have been his 32nd birthday, the Google Doodle honors the life and legacy of Tim Bergling, a Swedish DJ, record producer, and songwriter better known by his stage name Avicii. Tim will be remembered as one of the pioneers and most influential visionaries of electronic dance music, from producing hit songs that topped international charts to headlining festivals all over the world.

Tim died by suicide in 2018 at the age of 28 after struggling with mental health issues. Tim’s father Klas and mother Anki established the Tim Bergling Foundation in his honor to raise awareness and combat the stigma of mental illness among young people.

Klas Bergling talks about his son

Google spoke with Tim’s father, Klas Bergling, to remember Tim on this day and learn more about mental health.

Tell us about Tim in your own words — how do you remember him?

Klas: Tim was a kind and open person, full of energy, stubbornness and integrity. He had a special set of attributes, and if you watched the documentary about his life, I think you can also tell he wasn’t really built for fame in the way he was exposed to it.

Despite his success and fame, he remained humble and treated people with kindness and equal respect.

Was there a moment when you understood how musically talented he was?

Klas: When Tim was about 10-years-old, he sang the Swedish national anthem at full capacity. He really lived in the moment when doing that, and it was times like this I initially understood there was something special there.

Being part of a generation that didn’t grow up with house music, I used to view it as a monotonous, repetitive beat. When I started taking power walks back in the early days of Tim’s career, listening to his music, I realized what beautiful melodies were captured within the songs. It was an “aha moment” — this is really music — and I started needing it to get me going. Tim produced more melodic songs over the years, with “Bromance” being one of the big eye-openers to his talent for me personally.

Were there any moments you were especially proud of Tim during his career?


Klas: Tim was such a special person, I was always proud of him for just being the person he was. In terms of his musical accomplishments, I will never forget when he played in a park called Strömparterren in Stockholm in the early days of his career. He’d told me explicitly to not come — maybe because it wasn’t very cool to have your father around at that age — but I went anyway and hid behind a tree. It was a great evening and I remember feeling surprised, amazed and very proud. When I came to find him backstage afterwards, he was so glad I came.

An especially proud moment was also when Tim played in Globen Arena, today named Avicii Arena in effort to bring more attention to mental health, and I decided to sit completely by myself to take in the experience, as well as when the whole family went to watch him play at the festival “Summerburst” at Stockholm Olympic Stadium. He performed brilliantly at both shows — they were such great evenings.

After Tim passed away, you and your wife Anki started the Tim Bergling Foundation. Can you tell us about this work?

Klas: After Tim’s suicide, a lot of people reached out to us. Some who were in similar situations, but also a lot of fans who’d been following him throughout the years. Many people told us that Tim and his songs meant a lot to them and they felt like they knew him, which I think they did in a sense.

The scale of mental health issues among young people is staggering. Tim was always interested in psychology and spirituality, and we wanted to honor him by doing what we could to help others. That’s how we brought the Tim Bergling Foundation to life, with the goal of contributing to young people’s mental health, lowering the rate of suicide among young people as well as removing the stigma around it. It’s not something you can do on your own, you need to cooperate broadly, and that’s what we try to do. We’re interested in bringing music into the picture as well, and have started working with organizations to spark young people’s creativity by giving them better access to creating and remixing music of their own.

What advice would you give to someone who has a friend or family member experiencing anxiety, depression or mental illness?

Klas: It’s not always easy, not least due to the stigma around these topics; it can be hard to talk about. But that’s what we need to do — talk about it. Simple things like asking questions can go a long way in helping someone heal. And if you see someone moving in the wrong direction, you should encourage or help them seek support.

I also think it’s very important for companies to get more engaged in these conversations and enable their employees to talk more openly about mental health.

People everywhere grieved Tim’s passing and celebrated his legacy — what has that been like for your family?

Klas: It’s given us great support in our sorrow and grief, a privilege we understand few in the same situation experience. You’ll always feel alone in a sense, but the love we’ve received from all around the world has meant a lot. I truly believe the small things — a smile, a short note — mean so much to people who are grieving. It can be hard to know what to do, and you often feel like whatever you do it’s not enough, but a few words often go a long way.

Is there a song of Tim’s that has a special meaning to you?

Klas: I always come back to the song “Bromance.” The song stands for so much that Tim was, and sends a message of friendship, which was always important to Tim.

You can read the whole article via the Google Doodle website.