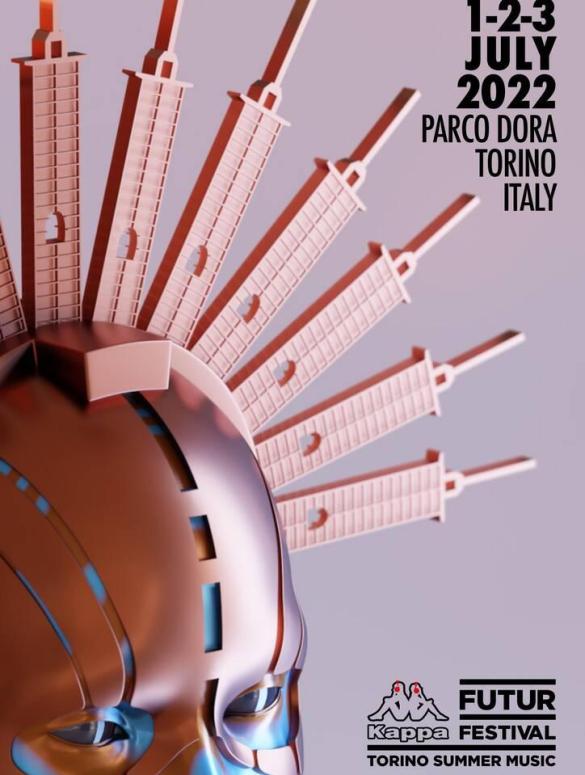 After the 2020 and 2021 editions were both postponed, Italy’s iconic Kappa Futur Festival has confirmed it will return in 2022 for its largest ever edition and for the first time ever adds an additional day to the festival in celebration of their long-awaited return.

After a two-year hiatus due to a health emergency, KAPPA FUTURFESTIVAL is back, one of Europe’s most prestigious electronic music and digital arts festivals, with its ninth edition set for the weekend of July 1 to 3, 2022.

The world-famous electronic music and digital arts festival’s 9th edition will take place on Friday, July 1st, Saturday, July 2nd, and Sunday, July 3rd, returning to the famous Parco Dora in central Turin, promising to be its most ambitious event yet, boasting the winning formula of spectacular weather, top-notch production, and an unbeatable line-up – plus so much more, all of which will be revealed soon.

The festival’s most recent edition in 2019 was a smash hit, selling out both days (over 50, 000 tickets) and bringing together over 100 countries of passionate house and techno fans to enjoy the world’s best DJs. As a testament to the festival’s continual growth and global appeal, Kappa FuturFestival also won the coveted ‘Best International Festival’ award at that year’s DJ Awards joining a prestigious list of previous winners such as Tomorrowland, Ultra Music Festival, Sónar Music Festival, Creamfields and Awakenings.


Kappa FuturFestival has established itself as a point of reference in the geographical maps of the great musical events in recent years, as well as a model of cultural enterprise with a very positive economic impact and visibility for the city of Turin, thanks to the highest level of artistic choice, sensitivity toward the promotion of the territory, technological innovation, and a careful look at the environment.

As is customary, great care will be taken with the production, paying close attention to every detail in order to make the festival experience one-of-a-kind in every way. Tickets purchased for the 2020 edition will be transferable to the new edition.

Kappa Futurfestival returns in grand style for a new edition, with an unmissable proposal to cement its position as Italy’s most important summer electronics festival.