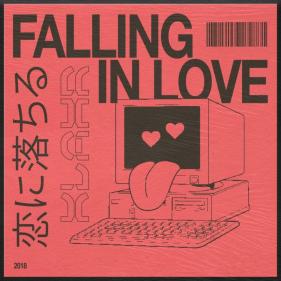 After his latest release ‘Live It Out’ on Axtone, Axwell’s wonderboy Klahr is back with a self-released song called ‘Falling In Love’ which is now available worldwide.

Infused by nostalgic vibes, downtempo beats and an angelic vocal, ‘Falling In Love’ is the track you’ve waited for so long. Injecting freshness in a super-saturated market as it is the music industry, Klahr’s ‘Falling In Love’ is a breath of fresh air for everyone in search of nothing but good music.

Since the first time you push the play button, the record will be able to switch off your brain and will guide you through a fantastic relaxing and recharging journey. While listening to it, it feels to be in Japan, during the hanami period, while you’re walking through this amazing dance of rose sakura petals that are falling from the trees.

The cover, which shows an old PC depicted with the typical face of when you are in love, is written with Japanese ideograms.

Klahr’s ‘Falling In Love’ has already been supported by Axtone’s Boss, Axwell, and it has been described by Ingrosso as “one of my favorite track of the year”.

The super-talent Klahr has now well-known in the dance industry thanks to his impressive skills in the music production field, widely demonstrated with his remix of Axwell and Ingrosso super hit ‘Dreamer’ and the ‘Dreaming Wild’ EP on Axtone. He has also played Tomorrowland, taking over the Axtone stage, as well as during the Axtone’s Japan club tour.