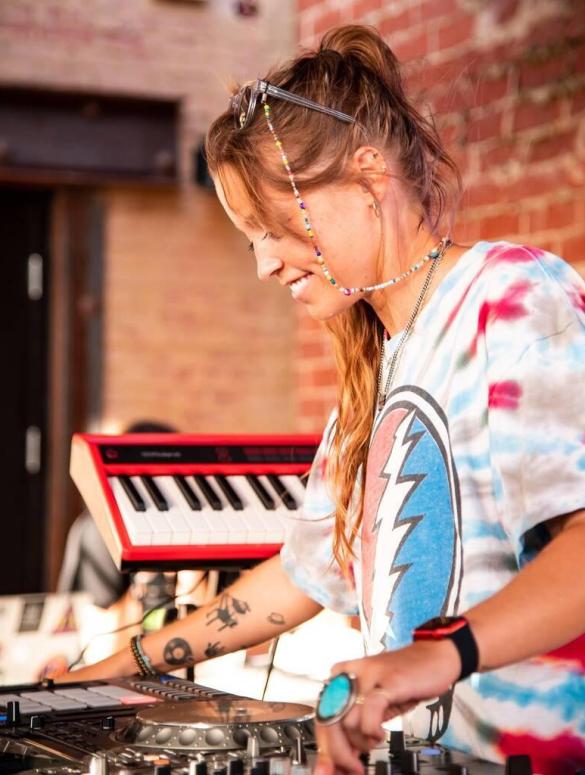 The first-ever ‘Femme House’ compilation, an 11-track package built around the ethos of a platform focused on empowerment, will be released by LP Giobbi in collaboration with Insomniac Records.

FEMME HOUSE is putting a part of its mission into action with the release of its first official compilation. The lead track, “Togetherness,” by LP Giobbi, is a soulful and urgent outcry for unity that finds frequent collaborator hermixalot spitting truth behind the podium. The rest of the album is split up between the organization’s beloved alumni and a few newcomers.

FEMME HOUSE and I teamed up with Insomniac to highlight a dozen of the most innovative, boundary-pushing, superstar caliber artists of our time; it just so happens they’re all women. Let’s celebrate Women’s History Month together by expanding our ideas of who is and should be a dance artist, or producer, or DJ. And let’s normalize equity across platforms, stages, albums, and every boundary that seeks to separate us. – LP Giobbi

​​Running the gamut from decadent house rollers to heady warehouse grooves, representation across a myriad of genres is also a major sticking point for this well-rounded affair. A few of the featured artists were gracious enough to respond and share some information about their contributions to the album.

Mija reveals an easter egg of a feature she incorporated into her track “Groove,” a gritty and stripped-down binge on bass guitar.

I was so excited when FEMME HOUSE asked me to be on this compilation, so I made this track specifically for them. My favorite part in the song is when I sampled my cat’s meows. It’s the little things that make it so special and fun! – Mija

Really happy this track found a home on Insomniac Records’ ‘Femme House’ comp. I love FEMME HOUSE and LP Giobbi, and everything they are doing to encourage and support women in music. I’m so happy to be a part of this comp and community. – VNSSA

We teamed up with @InsomniacRecs to highlight a dozen of the most innovative, boundary pushing, superstar caliber artists of our time; it just so happens they’re all women. https://t.co/3rrkuGXwCr pic.twitter.com/v9C0tQnDU7

The L.A-based phenom cuts the lights with her offering “In The Dark,” a murky tech house number carrying the torch of peak-time vibes.

On their radiant roller “Liftin Me Up,” Brooklyn’s designer duo Coco & Breezy—composed of sisters Corianna and Brianna Dotson—echo the importance of having a support system. They express their gratitude to the person who brought them into this world:


Progress isn’t passive, and it doesn’t happen alone. We are constantly setting intentions, reflecting, and affirming one another to help our whole tribe grow and prosper. We need to lift each other up—through words, through actions, and through music. That’s why FEMME HOUSE was a perfect partner for us with this song. No one has lifted us up more than our parents, so when our mom needed some support recently, we had to make sure we held her down like she’s always done for us. Our conversation is sampled in this song, and it’s the spiritual basis for the track’s message; ‘Everything is carved out in our lives for a reason.’ And of course, since it’s a Coco & Breezy jam, you know it also must have that groove to move your body and that feeling to heal your soul.

My track is meant to make you feel ignited,” exclaims. I have a love for in-your-face acid house and rock. I wanted to marry my voice with the two sounds that I love to create something that bangs! – Kaleena Zanders

On the squelchy and electrifying “Resurrected,” the singer-producer duo puts both of their talents on full display.

Baby Weight arrives from Washington, D.C. to take her throne on the unapologetic “House Princess,” which features the bodacious bars of Karnage Kills.

‘Gonna Be Alright’ is about the battle in your mind of wanting something so badly and also trying to be patient and present, telling yourself that it’s gonna be alright. – Mary Droppinz

Last but not least, Leena Punks contributes from the other side of the Atlantic with “Decisions,” a lush and effervescent creation that provides a moment of clarity.

This track is meant to convey a feeling of clearing your head and getting in touch with your surroundings (which is why it has lots of field recordings to infuse an organic element) being present and enjoying the moment. I’m such a huge fan of LP Giobbi as an artist, musician, DJ and entrepreneur in the music industry. Although it seems like female producers are having a moment right now, it’s really important to see more women making their mark and LP is definitely one of those amazing people – Leena Punks

Leah Chisholm is a blessing to the dance music world. Not only is she responsible for spreading constant joy both on and off the stage via her LP Giobbi moniker, but the veritable ray of sunshine has somehow found time in-between her demanding tour and release schedule to moonlight as the co-founder of FEMME HOUSE. The non-profit organization has devoted its entire existence to the advancement of equal opportunity for women and gender-expansive individuals in the music industry. Over the next couple of months, they are taking the mission across the country for the official FEMME HOUSE Takeover tour, a groundbreaking 12-stop initiative offering professional in-person workshops by day, followed by proper club parties by night. In keeping with the movement’s spirit, the one-of-a-kind programming is powered by all-female / non-binary talent from start to finish.

The album, which features Mija, Kaleena Zanders, Mz Worthy, VNSSA, Baby Weight, and others, is a housewarming celebration of sorts, welcoming in critical changes at the benevolent hands of LP and the groundwork she’s laying for the music industry as a whole.