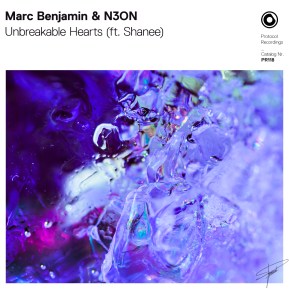 Marc Benjamin is back on Protocol with his second release on Nicky Romero‘s imprint; this time he has teamed up with N3ON for a progressive gem called ‘Unbreakable Hearts’.

The first thing you will notice when you’ll click the play button is the stunning voice of Shanee who sing the vocal. The crystalline vocal is driven by lush and cinematic soundscapes that build to a bouncing, energetic drop making ‘Unbreakable Hearts’ a pleasure for your ears. This one is not the first record by Marc on protocol: he debuted earlier this year with ‘Devil in Disguise’ which is a more “commercial” and pop-oriented tune.

Marc Benjamin returns on Protocol with ‘Unbreakable Hearts’ in collaboration with N3ON.

With releases on the major labels, Marc is creating a name in the industry. We have talked to him last year for his SIZE release. ‘Unbreakable Hearts’ is not 100% Marc Benjamin though; he teamed up with fellow Dutch producer N3ON who is relatively new to the worldwide dance scenario.