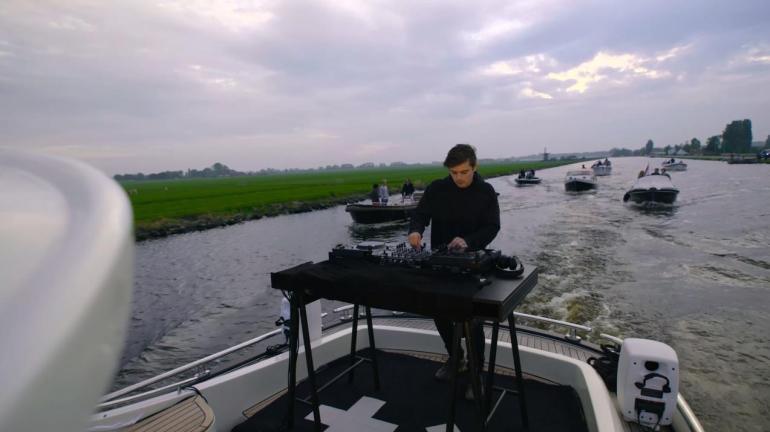 Yesterday, the one and only Martin Garrix played a special 1 hour DJ set on a boat cruising around Dutch canals. During the performance, he dropped some new music, upcoming STMPD releases, and never-heard-before tunes.

He surfed the Dutch canals during the sunrise and, thanks to the Reddit user u/itsjustin206 we have an idea of the route taken. They started from Warmond all the way to Huigsloot to end the journey in the dock of Koppoel. In the end, a special show with a guy wearing a water jet pack took place.

Kicking off with Mesto & Justin Mylo upcoming tune When We’re Gone, Martin has rapidly set the energy of the DJ set. Following his iconic Burn Out on the fifth minute, he played his upcoming single Higher Ground. Premiered in high-quality audio some weeks ago during Martin’s live stream from his home rooftop, the track is for sure one of the most awaited Garrix ID. Moving on, the Dutch legend played his classics in different versions as Jimi Hyde Remix of Used to Love.

From this moment you’ll hear the first-ever never-played-before tune. It’s Matt Nash ID bu, as you may imagine, it’s still no official. A catchy male vocal on top of an incredible futuristic-electronic main synth, a musical style that could fit Matt Nash one. Rapidly after, probably one of the most hyped ID of the set; it’s supposed to be the brand new Matisse & Sadko new single as it features hard and energetic beats with electrified synths and that rhythm typical of the duo. A track you really need to hear.

After his performances from the top of the A’Dam Tower in Amsterdam and a very special DJ set from his home rooftop, Martin Garrix has brought his fans on the magical Dutch canals, for a special boat party. Having played for more than an hour, Martin has dropped the incredible number of more than 5 exclsuive new IDs from him and STMPD's artists. One of them should be one of the upcoming Matisse and Sadko new progressive ID. The tune sounds fire, expecially the drop with these catcthy baseline and beats. What's your opinion? Do you like it? Is it by Matisse and Sadko or someone else? Swipe for the drop #matissesadko #matisseandsadko #amsterdam #amsterdamcanals #martingarrix #garrix #stmpd #progressivehouse #dutch #boatparty #electrohouse #livestream #livevideo #edmmusic #netherlands #netherlands🇳🇱

For the next 15 minutes, Martin played a series of his beloved tunes as No Sleep, Forever, Together, and so on. At the 45th minute, he premiered what it seems to be an upcoming Bleu Clair tune on STMPD. Uptempo beats with a chill vocal is the perfect sound for the upcoming season. It’s almost time to come back to the harbor but we have still time for some other exclusives; this is Dubvision’s new incredible progressive house gem, another song supposed to come out on STMPD on the next weeks or months.

Martin closed his set with his remix for Roy Gates Midnight Sun 2.0; a remix produced in 2012 way before his worldwide rise but still a gem we loved to hear.