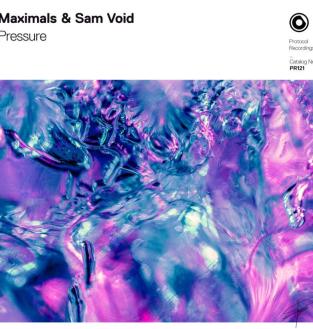 Nicky Romero’s Protocol continues its lockout release schedule with another progressive house vocal gem in the form of ‘Pressure’ by the Italian duo Maximals and Sam Void.

Opening with soft melodies, the track swells intermittently with energetic, uplifting drops, broken up by female vocals. The gentle melodies are driven by entrancing piano vibes that, together with the female vocal, give to the song a mystic aura. All the energy is released in a quintessential progressive drop, making ‘Pressure’ a staple anthem for belting out in the car or dancing to with that special someone in a dark club.

Veterans of Protocol, both Maximals and Sam Void mark their first collaboration together with ‘Pressure’. With enormous skills in the production of club banger and pop/radio-friendly hits, we are sure both artists will have a bright future ahead.

Founded by superstar DJ, Nicky Romero, Protocol doesn’t seem to want to slow it down; with more than two releases a month during this summer, their planning even bigger things with the upcoming Amsterdam Dance Event coming. You may think that a bigger amount of release quality suffers but, it’s not the case of Protocol. The work that the team is doing on the label is outstanding considering the quality and quantity of the releases and, if you want to taste it, we suggest to join us during Protocol label night in Amsterdam this October.