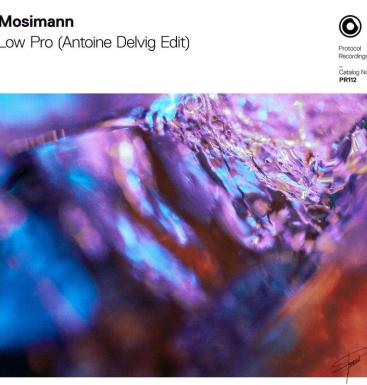 Protocol Recordings brings us one of the hottest tracks of the summer by way of the Antoine Delvig edit of Mosimann‘s “Low Pro.”

Delivering a driving bassline and hair-raising breakdown, this absolute bomb brings us back to the original days of progressive and electro house. Both Delvig and Mosimann‘s high-energy, explosive styles are evident in “Low Pro“‘s party-ready beats, making this a guaranteed hit for club dancefloors and festival stages around the globe. Delvig has previously released on Doorn/Spinnin’ Records, Musical Freedom, Axtone and Revealed. Put on your dancing shoes and press play on “Low Pro” to get your night started.

Mosimann and Antoine Delvig are both top-notch artists and producers in their own right, so it’s no small wonder that their collaboration on “Low Pro” is nothing short of stellar. From his early days as a famous French vocalist in the mainstream to his breakthrough to electronic music, Mosimann has cultivated a dynamic and unique sound inspired by the likes of Jean-Michel Jarre, Daft Punk and David Guetta. His release “Never Let You Go” featuring Joe Cleere has amassed over 3 million streams, and in 2017 he was officially charted on DJ Mag’s Top 100 DJs list. Likewise, Antoine Delvig exploded onto the scene with tracks like his official remix of Matisse & Sadko‘s “Into You,” which was released on Martin Garrix‘s STMPD Records. He recently made his debut performance at Protocol’s Miami showcase at ORA Nightclub, the first of what will surely be many shows in his future.