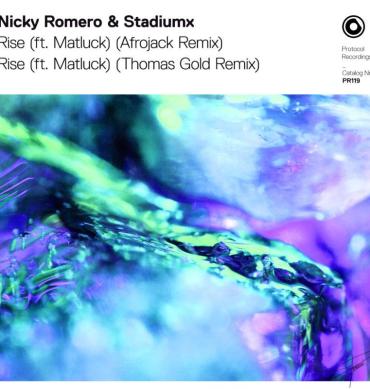 Nearly three years after ‘Harmony’, the super hit by Nicky Romero & StadiumX, Protocol’s head-honcho and Hungarian duo team up for another incredible record that fuses the organic instrumentals of country music with the upbeat, dynamic rhythms of progressive house. Released the 24th of August, ‘Rise’ received a massive support worldwide with plays on Bingo Players’ Hysteria Radio, This Is Sick by Sick Individuals, Smash the House by Dimitri Vegas and Like Mike and a lots more.

Afrojack and Thomas Gold jump on board in the Protocol’s ship with a remix for Nicky Romero & StadiumX ‘Rise’.

Now, after 2 months, the original ‘Rise’ has received two new remixes from dance music legends Afrojack and Thomas Gold. Each version has a unique take on the song’s upbeat rhythms and organic instrumentals.

Afrojack turns up the heat with his signature driving house basslines and dynamic percussion that turns ‘Rise’ into a hard-hitting club track. His famous Dutch signature sound is easily recognizable, especially on the drop that has turned ‘Rise’ into a proper festival banger.


Thomas Gold‘s melodic approach is a bit softer compared to the Afrojack one, creating a dancefloor-friendly and uplifting experience reminiscent of festival progressive anthems. The drop is invaded by magic sounds and a wide and mystical bassline that give to the record an indescribable aura.

This 2-record remix pack brings together four of the most notable names in the dance music industry: Nicky Romero, who has rapidly become one of the spearheads of today scene thanks to his unbelievable music and the amazing work with his label Protocol. StadiumX, who have confirmed themselves as one of the most dynamic duos in the industry. Afrojack, who actually no need presentation with an enormous carrier behind him made by the worldwide super-hits as ‘Ten Feet Tall’, ‘The Spark’ and ‘Forget The World’ album, just to name a few and, last but not least, Thomas Gold that you surely remember for the hit ‘Magic’.

Nicky Romero’s Protocol has always been a connection point between the biggest and the most desperate names of the industry and this two-record remix pack is another proof of the quality and the incredible work behind the label.