Nicky Romero and StadiumX team up for ‘Rise’ on Protocol 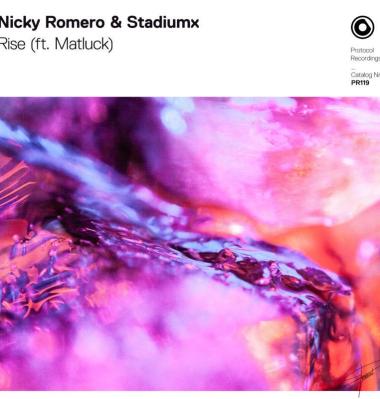 Protocol Recordings Boss’ Nicky Romero is back on its imprint, this time together with Hungarian duo StadiumX for another massive collaboration titled ‘Rise’.

Nearly three years after the super hit Harmony, Protocol’s head honcho and StadiumX joined forces for another great collaboration, featuring the voice of Matluck. The track keeps unaltered the upbeat and dynamic rhythms of progressive house, a very typical sound for both producers, adding a fresh touch of organic instrumental country music. This mix of mainstage beats and more radio-friendly vibes make ‘Rise’ a perfect hybrid between a festival-ready tune and a radio hit.

Exploded with the worldwide hit ‘Howl At The Moon’, which has rapidly become a pillar of progressive house music and now a classic of electronic dance music, StadiumX duo is an abituè of Protocol. A stable presence behind the decks during the Protocol showcases around the world, they have recently released ‘Dangerous Vibes’ as well as tunes on Future House Music, Spinnin’, and HEXAGON.

Nicky Romero has quickly progressed from a young musical prodigy to one of the most prolific names in modern dance music. He is not only a talented DJ and producer but also the label mogul of Protocol Recordings and a mentor to the up-and-coming artists whose careers he helps to cultivate. Through the constant evolution of his sound and reinvestment in emerging artists, Nicky has proved his ability to evolve with the ever-changing landscape of electronic music keeping him and his label to the top of the industry.