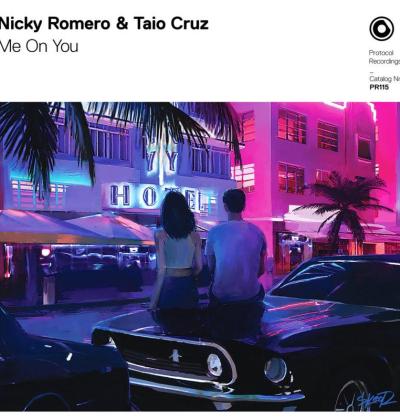 Worldwide renowned DJ, producer and label boss, Nicky Romero, is back on his own imprint with a new single called ‘Me On You’ in collaboration with Taio Cruz.

After the massive success of his previous club and festival bangers, Protocol head honcho has decided to go a little bit more radio friendly with his latest single. If you ever find yourself at the point where you love your crush as much as your favorite drink, you just might have found the type of attraction that Taio Cruz sings about in his new track ‘Me On You’. With Romero‘s lush soundscapes and future bass breakdowns playing host to Cruz‘s infamously sensual vocals the record fuse in a perfect way the pop vibes from Taio with the usual dance golden touch by Nicky.

Protocol Boss Nicky Romero delivers a giant collaboration together with Taio Cruz called ‘Me On You.’

With a respectable career, Nicky Romero is now one of the greatest DJ and producer, as well as human being, in the music industry. With Protocol, his music label, he gave voice to the upcoming talent finding talents from the lights of Sunstars, Maximals, Raiden and much more. Thanks to the massive work by Nicky and the team, Protocol is on the road to be the best music label of 2018.

Lightning in a Bottle announces Compass Music, Learning and Culture programming for 2022

UK singer, rapper, and producer Taio Cruz is equally as iconic, having sold over 100 million singles and more than 5 million albums worldwide to date. His chart-topping singles ‘Dynamite,’ ‘Higher,’ ‘Hangover’ and ‘Break Your Heart’ have become singalong staples, and Cruz isn’t slowing down anytime soon.