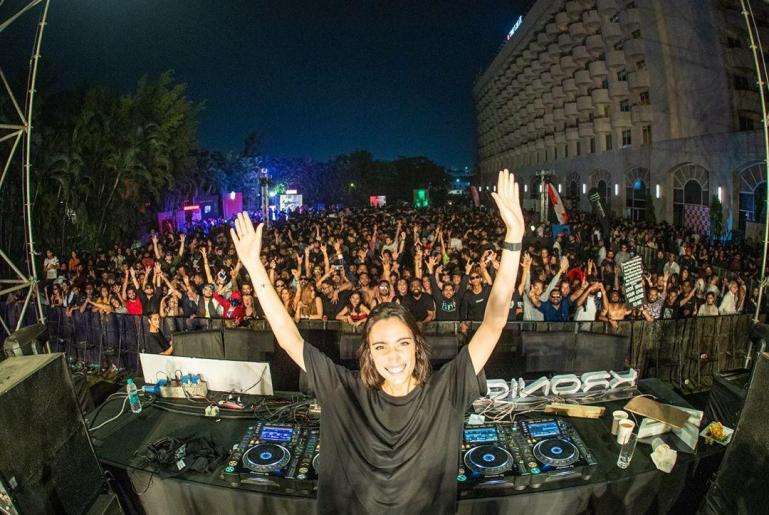 Belgian Techno star Amelie Lens treated India with a 3-city tour inclusive of Mumbai, Bengaluru and India’s capital New Delhi. The Lenske owner was supported by another talented producer hailing from Belgium named Farrago and an Indian DJ/Producer Bullzeye. The set was impeccable and loaded with hard-hitting tracks along with some new music from both Farrago and Amelie herself. Our team was there to witness her live in Mumbai.

A few days ago, Amelie Lens unleashed the 10th release on her label Lenske which was a compilation EP entitled The Future. The EP is made up of a five-track collection from artists like Farrago, Milo Spykers, AIROD, Ahl Iver and one track from the boss herself. She did drop some of these tracks during her live tour in India and she has also been road-testing these tracks on her other shows as well.

The venue in Mumbai (Lalit Lawns) was mesmerizing and it perfectly blended with the outstanding production and lighting. Besides the spectacular set by Amelie Lens, she was humble enough to autograph a bra that was given to her by a fan. In addition to that, Kitty Su hosted an after-party with a surprise B2B set where Amelie Lens joined forces with Farrago. It was a mind-blowing set and we were overjoyed to be a part of it.

Talking about Amelie Lens, she is on the infectious rise to conquer more and more with her Techno sounds. This year, she is also hosting her own stage “Exhale” at Tomorrowland. We are also happy to see all these female DJs like Charlotte de Witte, Nina Kraviz, Deborah de Luca are getting the recognition that they deserve. According to some sources, Nina Kraviz and Amelie Lens played the maximum number of festivals across the globe.

Hit the play button below to watch the intro of Amelie Lens’ set in Mumbai. Watch out for this space as we cover more such artists worldwide.