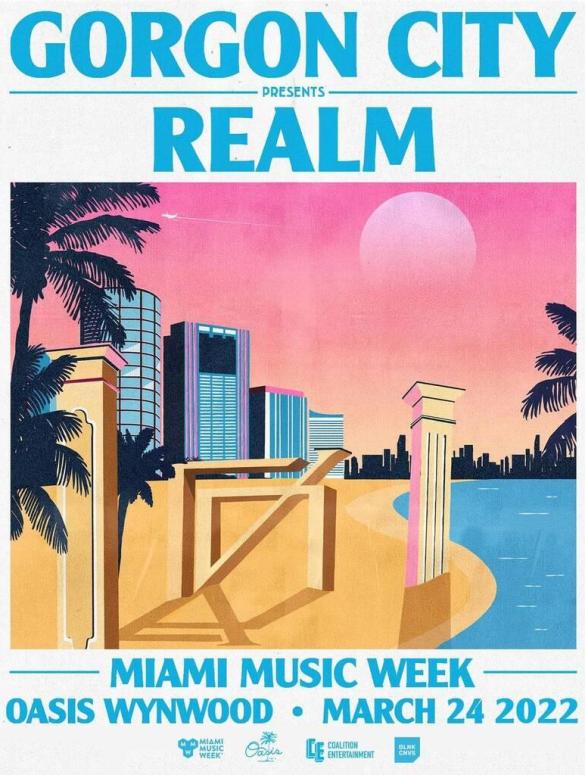 UK electronic duo, Gorgon City make their return to Miami with the REALM label party at the brand new outdoor venue Oasis Wynwood. Planned for the 24th of March 2022, during the Miami Music Week, tickets for the party are now available via Tixr.

Gorgon City presents REALM during Miami Music Week will see a huge lineup of artists and acts that will be announced very soon.

The party will be held at the brand new outdoor venue Oasis Wynwood. The restaurant/bar/music venue hybrid in Miami’s artsy Wynwood neighborhood is a one-of-a-kind outdoor/indoor venue that brings a piece of paradise to the heart of the city. The 35,000-square-foot open-air courtyard features six premier dining destinations, each serving food from a colorful, repurposed shipping container, as well as a 75-foot tall Tower Bar, built from shipping containers and depicting a vibrant by renowned Spanish artist Antonyo Marest. The atmosphere is tropical and chic indoors at Huacachina (the venue’s bar named after the world’s most beautiful oasis). With a large outdoor stage, the venue is quickly becoming the city’s cultural hub.

Gorgon City have established themselves as one of the most in-demand acts in the industry, thanks to their unique blend of bass-driven house music and addictive vocals, and have enjoyed stellar success over the past 8 years. Having released recently their brand new album Olympia the duo is ready to take over Miami Music Week 2022.

During this year’s MMW, Oasis Wynwood will host a series of other parties including Steve Aoki’s Dimmak Miami showcase.