Kryder and Kryteria announce the annual Miami pool party in the form of God Save The Groove MMW Edition. 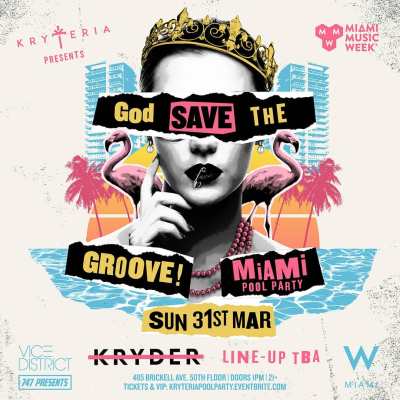 With a month from the annual Miami Music Week, artists and label are releasing their party schedule for it. We have seen Toolroom, Pryda, Defected, the official WMC opening party and now it’s the turn of the groove boss, Kryder.

As every year, first with Sosumi and now with Kryteria, Kryder is used to host his own party in Miami. The location chosen is the top of W Hotel Miami, already used for the 2016 and 2018 parties. Starting from 1 PM till 10 PM in the evening, the party will bring the groovy vibes in Miami. The date is set for 31st of March, last day of the MMW as well as the closing day for Ultra Miami.

If the name of the party sounds familiar to you is because the same concept has been used in Amsterdam last year. The first edition of ‘God Save The Groove’ took place during the annual Amsterdam Dance Event last year, with a boat party on the Dam river.

Not only a party but ‘God Save The Groove’ is also a compilation of 35 tracks, divided into 4 CDs, mixed by Kryder, Simon Kidzoo and Cato Anaya. The same will be presented again in Miami, with a brand new volume for the compilation.

Talking again about the party, the lineup is still to be announced. During the party, besides enjoying the incredible roaster of Kryteria’s (and not only) artists, you will be able to drop your music to Kryder on the demo drop spot as well as buy Kryteria merch and more. The entire event will be live-streamed.

Tickets are now available at around $ 25 and, before it’s too late, we’ll suggest to buy it as soon as possible. Follow this link to save your ticket. We hope to see you on the dancefloor.