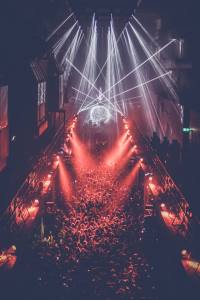 One of the hottest electronic acts of the moment, and the hottest club of the year. Bicep @ Printworks London. This explosive mix could only mean one thing: a hell of a party. To be correct, three parties, because one night would have left too many music fans outside the door. On November 21st, 22nd and 23rd Bicep hosted three exclusive live shows at  Printworks. England’s most chatted venue already hosted incredible gatherings such as CircoLoco, Anjunadeep, RUFUS DU SOL, and many more artists and labels parties.

printworks started as the factory that delivered the Metro and Evening Standard newspapers to London; now this building has become a groundbreaking multi-purpose venue which has already changed the face of the capital’s cultural scene.

Bicep’s self-titled debut album, released on Ninja Tune in 2017, got extremely positive reviews and support around the world; it projected the Belfast-born duo into the Olympus of the British electronic scene. This explains how they managed to get a three-day spot in the busy Printworks parties schedule.

Enjoy this “90 minutes of spine-tingling euphoria”, captured by Resident Advisor’s cameras. This show was one of a kind.