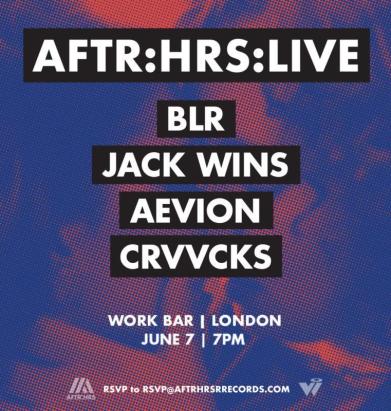 The famous Tiesto label, AFTR:HRS, has just announced a special event at London’s Work Bar, a label showcase that will be completely live stream with an incredible line-up composed by Jack Wins, BLR, Aevion, CRVVCKS.

The first ever Tiesto’s label AFTR:HRS party is ready to take over London’s Work Bar; the event will be entirely live-streamed.

Become one of the leading labels regarding house/deep-house, Tiesto’s label AFTR:HRS is bringing the international brand to the prestigious Work bar in London. Joined so far by the likes of Jack Wins, BLR, Aevion, and Crvvcks, the night is sure to represent the creative freedom and expressive musicality that the label revels in.

We have met some of the artists that will perform at the session and we have asked some questions about their release, their future in the industry and more.  Scroll down to read all our questions.[/vc_column_text][/vc_column][/vc_row][vc_row][vc_column css=”.vc_custom_1528278668195{background-color: #ededdc !important;}”][vc_text_separator title=”BLR”][vc_toggle title=”ou are a master of house-deep house and a veteran of AFTR:HRS. How was to be the first to release on the label with also the premiere on BBC Radio 1 by Danny Howard?” open=”true”]To be honest, it was a big surprise for me – since I had no idea Tiësto was planning to launch AFTR:HRS. The Spinnin guys showed the track during Miami Music Week 2016 to him, without telling him what it was and who made it – he instantly wanted to sign it as the first release on his label. Marco from Spinnin Records then sent me a text to definitely go check out Tiësto his set during Ultra – which I did, from my studio – as I wasn’t attending MMW that year. I thought he’d drop another track by me that was being promoted during that time, so I was very surprised to hear ‘Nungwi’ blast through the speakers all of a sudden. Super cool and a big honor to have made the first AFTR:HRS release. Marco also sent me a small video of Danny Howard dropping it at a pool party that same week – and afterwards he gave it the premiere you’re mentioning here. Yep, definitely was exciting![/vc_toggle][vc_toggle title=”We have noticed a little change in your music style with the latest remix for Three Drives of ‘Sunset On Ibiza’ that it’s actually more energetic. Are you going to release something in the same mood in the future or it was just a test? Do you like to explore new sounds/genre?” open=”true”]It wasn’t a test to be honest, for that remix I just thought/felt it needed some energy to do the original justice. In the future there will be some more energetic BLR tracks as well, but I will make sure the audience knows what’s what – for example by giving the more energetic mix of one of my tracks the label ‘Festival Mix’ – which I did for example for my last release ‘La Luna’ – the original was very chilled out and melodic whereas the Festival Mix has more of an, eh, festival vibe to it.

The answer the latter question is a definite yes – I love exploring new sounds and genres, it’s something I have been doing all my career – moreover, I like to bend genres, combine genres and create stuff that’s not easily labeled whatsoever.[/vc_toggle][vc_toggle title=”What are you going to play during your slot at the party?” open=”true”]I never really plan my sets, but I am definitely gonna drop a few new upcoming BLR releases![/vc_toggle][/vc_column][/vc_row][vc_row css=”.vc_custom_1528278690386{background-color: #e6eaef !important;}”][vc_column][vc_text_separator title=”Aevion”][vc_toggle title=”Your sound space from bass-house to something happier and chill. Do you like let your imagination flow when you’re in the studio or when you start producing you have already the ide of the track on your mind? ” open=”true”]I always let my imagination flow when I’m in the studio. I always create what I’m feeling at the time, I think that’s important as an artist. I’m so passionate about creating all different genre’s of music, It can range from Techno to Tropical![/vc_toggle][vc_toggle title=”You released an electro-house tune on OXYGEN more than 4 years ago. Can we expect something like that in the future or do you prefer the deep-bass sounds?” open=”true”]No, My sound has developed a lot over the years as well as my own musical taste, I feel like I’m producing the music I have always wanted to make right now![/vc_toggle][vc_toggle title=”What are you going to play during the party?” open=”true”]I’m going to play a few tracks that I love playing out at the moment! I’m also going to throw in a couple of exclusives from me that are going to be released very soon, so stay tuned![/vc_toggle][/vc_column][/vc_row][vc_row css=”.vc_custom_1528278714142{background-color: #ededed !important;}”][vc_column][vc_text_separator title=”Jack Wins”][vc_toggle title=”Hey Jack, a lot of our fans discovered you thanks to the ‘Dreamer’. How is the idea born?” open=”true”]I approached the remix for ‘Dreamer‘ in the same way I normally tend to do it – I just take the acapella and start writing new chords around it. From there I just develop the track – I wanted to have quite a simple, but an energetic drop, so decided to just go with a strong bass line. Generally, I tend to look at other tracks that work well in my sets and use those as a rough guideline.[/vc_toggle][vc_toggle title=”Yor sound can easily be spotted thanks also to the groovy/thick bassline. How long it took to develop it?” open=”true”]

For every track, I use a new bass sound generally – I tend to use a combination of samples and synths and process them. When it comes to melody/pattern – It’s whatever comes up to me on the fly. I guess the more you produce, the more you develop your own way of working and therefore your sound.

[/vc_toggle][vc_toggle title=”You have released a clubbier track on Axtone. Do you think we will hear something more energetic from you in the future?” open=”true”]Yeah definitely – I’ll keep doing my vocal tracks, but definitely will do some clubbier stuff under ‘FULL HOUSE!’, which I have done in the past as well. Always like to mix it up a bit :)[/vc_toggle][vc_toggle title=”What are you going to play tomorrow at the party?” open=”true”]A mix of my favorite (vocal) house tracks – keep it nice and groovy and fun: feel-good house music![/vc_toggle][/vc_column][/vc_row][vc_row css=”.vc_custom_1528288862187{background-color: #e7ffe0 !important;}”][vc_column][vc_text_separator title=”CRVVCKS”][vc_toggle title=”So, you’re going to play today for AFTR:HRS show. Can we expect new CRVVCKS music on the label?” open=”true”]Of Course! I shall be hopefully releasing soon, AFTR:HRS is an awesome label.[/vc_toggle][vc_toggle title=”Every track you have released is deep-chill house. Do you have tried to produce something different or do you prefer to concentrate on this music genre?” open=”true”]I have, yes. I like to create a different version of my tracks, which is something I did for “Just You”. In future also my goal is to write music for other artists in other genres.[/vc_toggle][vc_toggle title=”Besides the music, we at TGC, pay a lot of attention to the visual contents of the releases and we have seen you follow a minimal but of great effect mood for your cover art. How and why have you decided to use this theme for your cover art releases?” open=”true”]I really love the idea of continuity, I feel that with the visual aspect of music, it can be the first thing a person sees before listening to your track. I feel that my artwork helps to tie in with my overall brand and that can really help an artist grow![/vc_toggle][/vc_column][/vc_row][vc_row][vc_column][vc_column_text]The massive event is planned for tomorrow, this session is sure to follow with a string of equally enticing events. Pop into the first one to find out why there’s such a buzz around Tiesto’s first deep house imprint – tune in
online (Follow AFTR:HRS Facebook page for it) if you can’t make it down.[/vc_column_text][/vc_column][/vc_row]