Toolroom to host all night long terrace party at Studio 338

Toolroom have announced a huge party at Studio 338, with Illyus & Barrientos, Mark Knight, Maxinne and very special guest Jack Back 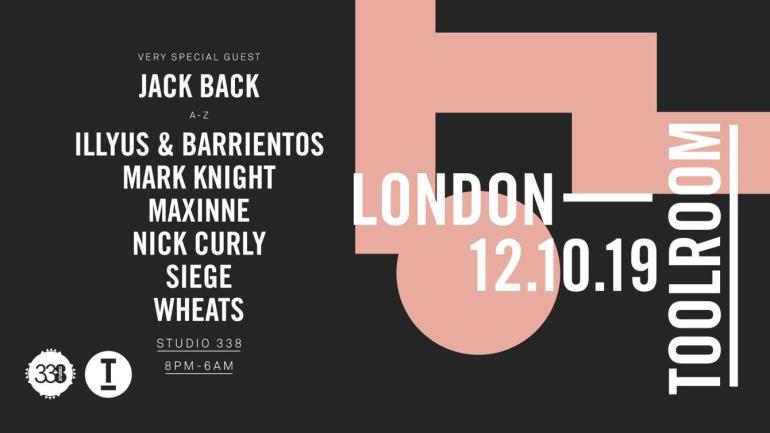 After a SOLD OUT party in July, Toolroom will be back at Studio 338 in London this 12th of October.

Kicking off on Saturday evening at 8 pm and running all night long until 6 am on Sunday morning, Toolroom will bring a huge lineup in London again. Including Illyus & Barrientos, Maxinne, as well as label boss Mark Knight and a lot more, Toolroom party promises to be a real highlight in the autumn clubbing calendar.

As headline and special guest, Jack Back will take over the stage with his London debut. Jack Back is David Guetta’s house and techno alias; in the last months, he has released a number of absolutely killer singles on Toolroom; two examples are 2018’s Grenade and the more recent 2000 Freaks Comes Out. We have joined Jack Back in March, during Miami Music Week and, we can confirm that the party will blow up once he starts playing. Expect nothing but tough, raw, jacking beats aimed squarely at the underground.

Becoming a cornerstone for Toolroom, Illyus & Barrientos will join Studio 338 party with their powerhouse signature sound. Germany’s Nick Curly will be gracing Toolroom party lineup as well with his sophisticated blend of tech-house.

Hailed by Mark Knight as “the most talented tech house producer in the world right now”, Seige is another top-quality addition to the lineup.

Completing the Toolroom Studio 338 lineup, Wheats has been spotted by Mark Knight, his sound features big room inspired elements without being boring, repetitive.

2019 has been a huge year for Toolroom. With two sold-out parties in Miami during MMW, a sold-out event in July at Studio 338 and a successful residency at Eden club in Ibiza, Mark Knight’s imprint is surely one of the most talked and appreciated house and techno imprints.

Tickets for Toolroom Studio 338 takeover are already on sale. Follow this link to save yours. Toolroom Ibiza 2019 Vol. 1 and 2 are also out now. Featuring an enormous number of exclusive tunes, they’re the best soundtrack for your summer. Check out the latest Toolroom news here.