Rob & Jack team up with Sanjin for ‘Bashment Ting’ on Revealed 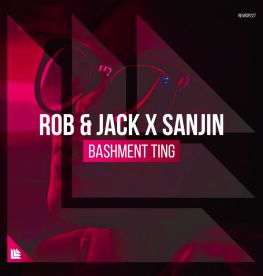 Rob & Jack are back for another collaboration with the fellow Sanjin called ‘Bashment Ting’ out now on Hardwell imprint Revealed.

This is not the first experience of the duo on Revealed; back in 2016 Rob & Jack remixed ‘Light The Sky’ by Dannic and, just last week, the duo is back on Hardwell label with a friend. If you’re following duo you certainly now Sanjin; they have collaborated in the past on ‘Badgal’ on Code Red and Sanjin himself has released music together with Salvatore Ganacci, Garmiani, DVBSS and more.

Rob & Jack team up with Sanjin for ‘Bashment Ting’ on Hardwell’s Revealed Recordings.

‘Bashment Ting’ is their first ever single on Hardwell’s label and it features the typical groovy percussive sound by Rob & Jack with an increasingly vocal that jumps into the first drop. In here, a mix of old-style big-room, with huge kicks and wide top synth are perfectly merged with a more groovy and latino-style melody. The breakdown gets back with the initial vocal, adding more substance thanks to a clever use of the percussions.

‘Bashment Ting’ is the perfect mix of sounds that let you drop it both on mainstages and smaller clubs with a limited crowd.

Rob & Jack are really not new to the scene. With releases on Armada, Flamingo, Atlantic, Staar Traxx, and Refune, the duo has become known over the years and ‘Bashment Ting’ is another proof of their and Sanjin skills on the music production field.