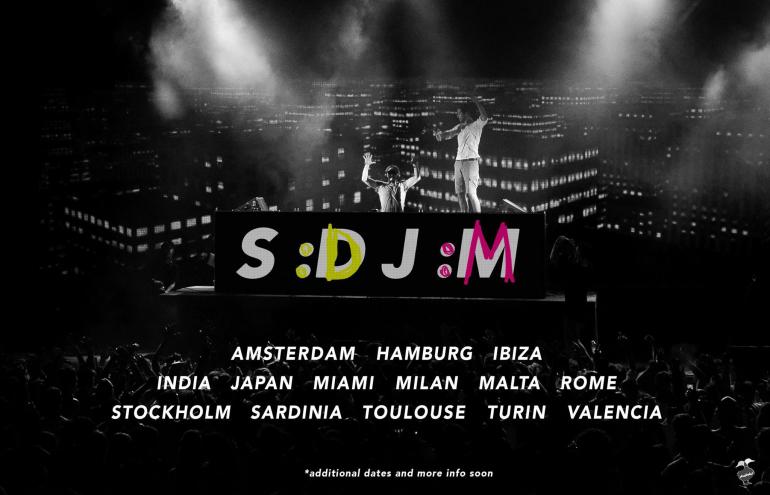 [vc_row][vc_column][vc_column_text]As every year Miami hosts one of the biggest EDM event on the globe: the Miami Music Week. DJs, producer, labels, fans and so on have been meeting every year the third week of march in Miami. Labels host the greatest parties, DJs plays their upcoming track and fans are blessed for the amazing feeling of Miami.

This year, thanks to Protocol, we have joined its party at Ora Nightclub in Miami. The lineup contained names like the label Boss’ Nicky Romero, the Italian duo SDJM, Tom Tyger, Raiden and much more.

We had the chance to interview SDJM, the new Project by Simon De Jano and Madwill and this is what they said.

GC: How did you meet for the first time and how your project was born?

SDJM (Simon): Oh good question, you want to know the truth or the official version? We met talking three years ago, then we decided to start working together. We tried the first time releasing tracks on Sosumi and then we said each other “I worked well with you!”. So we decided to join all our forces on the Simon de Jano & Madwill project.

Working together we released on Size, Axtone, and Protocol. Now we are working in the studio on the new tracks, which are dance/pop-oriented, we’ve already signed on Warner UK and we decided once again to join all our forces in this new project, that because of the new sound, needed a different name, so we created SDJM.

(Madwill): Originally Simon de Jano used to work with Bottai, they released Delorean and K.I.T.T. together and I loved those tracks! Then I had the opportunity to release my solo track on Sosumi (Skyline N.D.R). Shortly after I met Simon and we said: “Wow, why don’t we make something together on Sosumi?”. We tried to make a lot of different stuff before releasing our first tune that was “Thriller”, for the Halloween EP of Sosumi.

We live close in Milan and we are friends, so it’s easy for us to work well together, we meet in the studio to share ideas and that’s how the magic happens! (Laughs)

GC: Simon, do you teach music? Is there any of your students that asked you to collab?

SDJM (Simon): My students mostly don’t know that I’m a DJ/Producer, but sometimes they discover what I am doing and they ask me about it! I usually tell them that I can help them but we definitely can not collab, in the end, I’m their teacher!

GC: We know that Temptation helped you to reach the Beatport Top Ten, tell us more about the track and about your relation with Still Young.

SDJM: After the Thriller release they tweeted to us that they were loving our stuff and for us was an incredible thing because they are our big brothers now, but originally they were like an idol for us.


We started working on two tracks, one of them eventually became Temptation.  I still Remember when they sent Temptation to Steve Angello, it was December the 23rd 2014. He immediately liked it and texted back them after 2 hours, I don’t remember the time but I think it was early in the morning, maybe 2 AM and they wrote to us “Steve want it for Size”.

In that moment we were so excited and it was only the beginning: Steve played it for the first time at Ultra Music Festival 2015, then we had a little issue with the vocal and it took sometimes to be fixed. In the end, Steve approved it and we released in December, and the rest is history!

GC: With Fraanklyn, you are part of the “WeAreGroovers” trio, what should we expect from that project?

SDJM: WeAreGroovers was originally born as a joke, but with a big surprise, it worked very well, especially in Italy where we had some serious party with big guests, like Matt Nash, Michael Feiner, Meg & Nerak, Shapov and Third Party.

After the “Mantra” remix we decide to evolve a bit our sound, in a more “dance/pop” way and Fraanklyn decided to continue his groovy stuff, so for the moment, it’s stuck.

GC: The Heat, with Ralph Felix, is one of the most successful tracks at the moment, how it was born?

SDJM: we are really good friends with Ralph and we share music every week. Last year he came to Milan and we started working on The Heat.

In the first sketch The Heat didn’t have the whole acapella of “I Wanna Dance With Somebody” but we knew it had a potential. In a short time, we finished it and Warner liked it immediately.

GC: What would your dream gig be?

SDJM: Probably our biggest dream is playing at Ultra. Our first dream gig was playing at Pacha, in Ibiza and we, fortunately, realized it playing at David Guetta’s party “Fuck Me I’m Famous”.

By the way, we don’t actually feel “festival DJs”, so our dream now is definitely playing at Mambo Ibiza!

GC: What are your future plans?