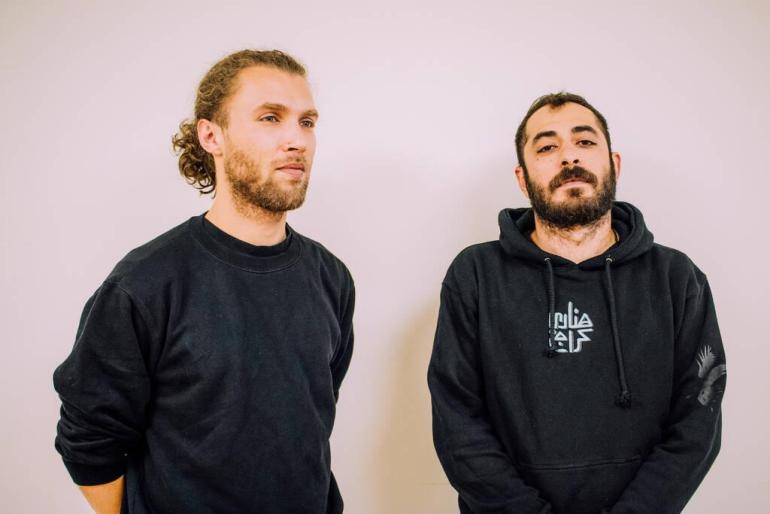 Shkoon, one of the most exciting and authentic outfits in the current electronica landscape, are changing the face of Arab underground music. Gaining considerable international acclaim and recognition off the back of their experimental live performances, stunning original productions, and modern re-interpretations of popular Arab classics, the duo are building bridges between traditional Middle Eastern music and modern club culture, as they serve to unify multiple demographics and generations through their richly eclectic productions and ethereal track selections.

Following their remarkable international success with their remix for Ragheb Alama’s Ya Rayt in March, the German-Syrian electronica outfit look to continue their prolific 2022 run with the announcement of their touching new live album, FIRAQ.

FIRAQ – which translates as ‘division’ or’split’ in English – is a mesmerising and emotive body of work spanning an extraordinary range of texture, tonality, and rhythm. It was recorded during the pandemic, just a few days after the death of a close family member. A beautifully crafted musical journey, which unfolds over a heart-wrenching selection of rousing electronica cuts, FIRAQ is Shkoon’s first full-length album since the release of Rima back in 2019 and marks another career-defining moment for an act whose collective creativity and musicianship knows no bounds.

FIRAQ is an album that’s incredibly close to our hearts and a project that took on a great deal of poignancy following a death in the family. A huge amount of raw emotion and angst went into the recording of the album and it is an experience that will stay with us both forever. Adding to this, the artwork for the release is taken from some old drawings from the deceased that have been adapted and modernised by our very talented friend and designer, Hadeer Omar. – Shkoon

Ameen, who is originally from Syria but is now a refugee in Germany, met German native Thorben in Hamburg in 2015, where they began producing together under their Shkoon project. It didn’t take long for them to amass a sizable international following and establish themselves as tastemakers in the Arab electronica scene. They released their long-awaited debut album Rima in December 2019, which was followed by a worldwide album tour that included sold-out shows in Beirut, London, Paris, Berlin, and Hamburg. Unfortunately, Ameen’s refugee status hampered booking opportunities in many countries, adding to the duo’s passion and dedication to connecting with music audiences all over the world. Using their music as a message for cultural diversity, the pair takes huge inspiration from their respective backgrounds, gravitating to Syrian folklore when devising their lyrics in Arabic and opting for western-rooted electronic music for the format.

WTR, a subsidiary label of MDLBEAST Records, debuted in March 2022 as a home for organic, arabesque, and electronic music. Taken from the Arabic word ‘watar’ – meaning ‘string’ or ‘chord’ – the label represents a blend of deep, ethereal sounds from the region, and champions traditional Arab and Oriental music within a modern electronica framework.