Steve Angello talks about the reason why Swedish House Mafia get forced to cancel gigs in the last days.

Now, after a question from a fan, Steve Angello answered explaining the technical issues they faced.

Steve Angello explains that their equipment broke up in Poland, after a rain. They managed to get a replacement for Ultra Europe but, unfortunately, it was local equipment and they couldn’t take it with them. Steve continues that they do no more normal Dj sets. Swedish House Mafia play live synths, drum machines and more and if one of these gears broke, they’re unable to perform.

Talking about the rumors and people getting upset, Steve Angello answered that there will be always someone upset, regardless, and that they’re losing money if they don’t perform, not the other way.

You can find the conversation below. 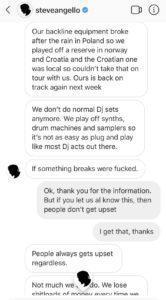 Some days ago Angello explained to fans why they’re not releasing music.

Swedish House Mafia will play this Friday, at Ushuaia Ibiza (tickets) for their only date on La Isla. There are rumors on the trio showing up on during the closing slot at Tomorrowland too but, nothing official yet.