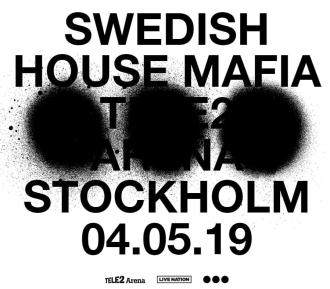 After 7 months of waiting and continue teasing, Swedish House Mafia have finally revealed they will play Tele2 Arena on the 4th of May in Stockholm.

It has all started today with a press conference in Swedish House Mafia hometown, Stockholm. The interview was live streamed on both YouTube and Facebook and it was entirely in Sweden; this is why we have reported below the main topics treated during the interview.

First of all, they have confirmed their new show, next year, in Stockholm at Tele2 Arena the 4th of May. The tickets will be available this Saturday 27th at 12.00 via LiveNation. A pre-register form is available on Swedish House Mafia site. You can find it at the end of the article. According to LiveNation, they are split in General, Platinum, and VIP but, at the moment there’s no information on what they include. Ticket price is set to 43-75 € (450-750 KR).

Talking about the interview, they have confirmed thay they have started to produce new music together and they’re going to premiere a lot of new songs during the show; as reported on LiveNation “we are extremely excited to announce that Swedish House Mafia will premiere brand new, never-before-heard music at their first show together in over six years – on home turf – in Stockholm, Sweden, where it all began with just three kids and a dream.” After the question of what will be the style of the new music, the trio answered with a cryptic (as always) “music of today”.

Talking about the solo projects, Axwell /\ Ingrosso and Steve Angello, the trio told they will put them on hold to focus 100% on Swedish House Mafia.

Below you can find, besides the full interview in Sweden, also the pre-register form for Swedish House Mafia Tele2 Arena tickets pre-sale and LiveNation page for the Swedish House Concert.

It has all started with the reunion at Ultra Miami this year that has preceded the new reunion merchandise. The members of the trio have started teasing a 2019 world tour for Swedish House Mafia. Hints have increased exponentially during last week with the countdown on SHM website and a city of Stockholm entirely covered with Swedish House Mafia posters. The final stage happened last night with the sighting of a big billboard with the three dot logo.[/vc_column_text][/vc_column][/vc_row][vc_row]