Swedish House Mafia It Gets Better appeared on ASCAP

Swedish House Mafia opening ID It Gets Better has appeared on American Society of Composers, Authors and Publishers (ASCAP) website.

Last week, Swedish House Mafia performed at Singapore Grand Prix marking the end, for now, of their reunion tour. The trio during these six months or so has played a great number of gigs worldwide and, for the happiness of fans, a couple of new tunes. From the Intro ID to Underneath It All and A$AP Rocky collaboration, all the IDs have been pretty mysterious. No info has been released yet.

Only a month ago or so, the first “officialization” of Swedish House Mafia’s new releases appeared on the web. Shazam added on its database both It Gets Better and Underneath It All correctly displaying Swedish House Mafia as artists. Now, on the American Society of Composers, Authors and Publisher’s website, It Gets Better has been registered showing all the authors behind the track. 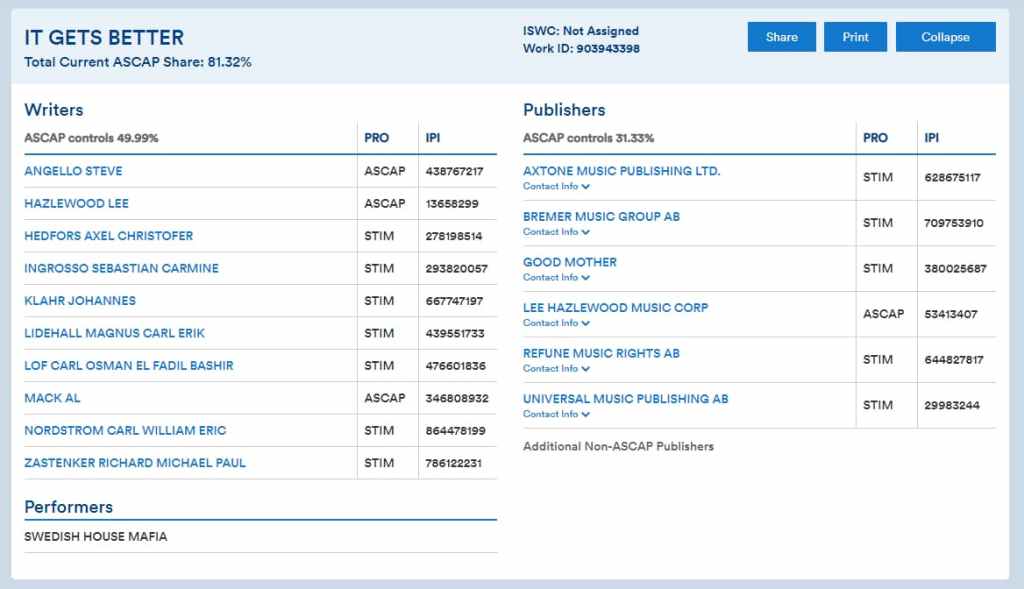 The page dedicated to the record shows that besides the members of the trio, Axwell, Ingrosso, and Angello, also Klahr appears on the writers as well as part of Axwell / Ingrosso team (Magnus The Magnus, Richard Zastenker). From the page, you can also notice how the track is registered for publishing under Axtone and Refune as well as Universal.

With It Gets Better that starts to appear on music-related platforms, release date in the near future seems to be possible. There’s no more info at the moment. You can still stream the track below.

The American Society of Composers, Authors, and Publishers (ASCAP) is an American non-profit performance-rights organization (PRO) that protects its members’ musical copyrights by monitoring public performances of their music, whether via a broadcast or live performance and compensating them accordingly. ASCAP collects licensing fees from users of music created by ASCAP members, then distributes them back to its members as royalties. In effect, the arrangement is the product of a compromise: when a song is played, the user does not have to pay the copyright holder directly, nor does the music creator have to bill a radio station for use of a song.